You are here: Home › A Silent Thank You
By Veronica Hallissey on July 25, 2014 in Essays 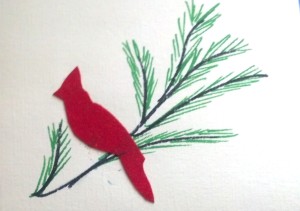 Where are we going,  he asked and I said to do some errands .   We can walk and because it is early,  it is still cool.   We did not hurry along,  just sauntered.   As we came to the corner we heard a marvelous bird song.  We stopped, looked at each other and then he pointed up.   We saw the solitary bird singing his mighty song.

The little one squinted and said I see you and I hear you.  And the bird stopped his singing.   Ohhh the young one said.  We waited and then walked on.   It is okay,   I said.   We continued to the next corner and there was another clear song.   We looked up and he said whispering,  I not say anything.  So then I said,   I can hear you but I cannot see you.  And the singing stopped.

They not like our saying to them that we like their singing?   I cupped his face with my hands and said,  I think they are surprised that we take the time to listen.   By listening we say thank you quietly  and they hear our thoughts.   He took this thought and nodded yes.

A few blocks later there were songs being sung though we could not see any birds.   I felt a tug and looked down at the questioning face and in his grateful voice said we do not see you but not stop your song.  And they continued to sing.

I also thank them he said.   Do other peoples give thank yous?   I guess not too often I said.  We forget as we get older I think to give thanks for what we do not see even when it is beautiful and we know even when we do something good and could not do what we do alone without some help.  Like the singing and the morning and the night when we sleep.   I ‘member always now, he said.   I don’ want the singing stop ever.   Not ever he said.  My heart be sad then, he said.  Very sad.

2 Responses to A Silent Thank You