You are here: Home › When The Call Is Heard
By Veronica Hallissey on November 4, 2014 in Essays, Poetry 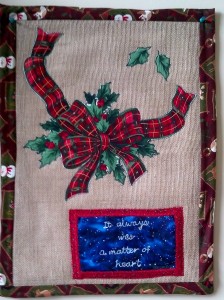 What would you do?

We often hear a young person say that they have a call upon their soul to do certain things.  Certain career choices are often made that way.  To be a doctor, to follow their God whatever the religion of choice, or often a teacher or a farmer.   There is a definite something that transpires within the hearts and minds of individuals that starts them on their life’s work.   They may be simple words or long mind dialogues with their soul’s mentor.   I include this brief advance explanation to my poem to show that even the elderly were young once with directives given to their lives.   The following was taken from a journal entry in the summer of 1966.   Many of you were not born then, but there was a generation of us tramping through rough bush so that our children might have smoother paths.   I offer a question.   What would you do when the call is made upon your soul?  What would you do?

When The Call Is Heard

I wondered when the call
upon my soul was made,
what would I do?
When I heard the words ‘come follow me’. . .
I walked into the room
of our youngest one,
sleeping the sleep of the innocent.
He was sprawled with hands
unclenched and his face at rest
and through the window
the street lamp’s globe
had his face in bas relief.
And I knew, no matter the good
I might do in the world at large,
I could not do, if the ones I grew
beneath my heart were crippled
by my neglect.   No matter. . . .
He had said,  did he not,
what good to save the world
when your own house falls apart.
I left the sleeping ones and
sought my bed and slept.
I did not fault myself.
There was much to do where I stood
and I began with the log in my eye.
Forgiveness of others was a stumbling block
only until I realized my need of it.
The independent study consumed my life
and revealed a hidden mentor.
A half century later my answer does not differ
and my regrets are few.

Commitments lessen the number of options.   Even now.

4 Responses to When The Call Is Heard