You are here: Home › Valentines For Ever’one
By Veronica Hallissey on February 9, 2015 in Essays 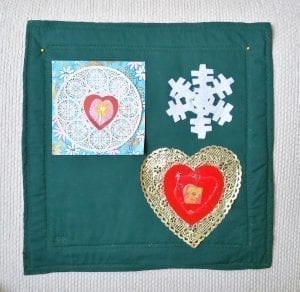 ‘Til ever’ name is called

Can we make valentines,  he asked?    The younger looked as if he was torn by a big decision.

Why make them, I asked?   ‘Cause there are lots I know and they be real from me,  he said.   How real I asked and he looked at me puzzled.   I waited for an answer I thought would clue me to the crease on his forehead.

So’s they know I care he sputtered.  Don’t you know that for sure?  Again I waited.   They just don’t know, he said,  they don’ know.   What are they supposed to know I asked.  He came over to me and sat on the floor at my feet.   ‘Member, he said,  when you were like me and nobody ‘membered you  and your  name not called out and there were lots an’ lots of valentines in the heart box your name not on  cards?

I looked at this tender younger and wondered where he wandered.   My stomach knotted as I remembered the little girl that I was who sat and hungered for my name to be called.  The teacher was almost finished and looked around and said I have a few more cards yet and one had my name.   I rushed to claim it and knew it was from Guess Who ?  But many of the cards were from guess who?  because boys and girls knew the word embarrass.    Much later we learned that our teacher checked off names as she called them and to make certain everyone had a valentine she had a supply in her desk.   We did not know it then of course.

And what are your plans I asked.   He said in his take charge voice it was not nice for some not to get cards so I give ever’one card and I make them so they be real.  Good thinking I said but no favorites?   When time comes for favorite I give real valentine.   That be my heart he said.   That be real valentine, think so, yes?

I lifted him up and hugged him.   Whoever gets your heart will be special because you are special.   ‘Til I be grow up,  he asked,  you be my valentine?   With pleasure sir,   with pleasure  I said and hugged him again.  So we went to make valentines for ever’one so ever’ name is called.  It would be awhile before I learned that ever’ name is called.

The Prayer Altar
This Valentine Heart

2 Responses to Valentines For Ever’one