You are here: Home › One Of The Best Things
By Veronica Hallissey on March 30, 2015 in Essays 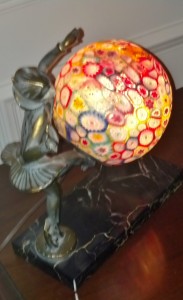 One Of The Best Things

One of the best things about growing old is that one has a store of memories to choose from to either entertain,  beguile or sometimes companion one in the body’s misery.   All one has to do is  conjure  the memory and whoa!    There we are.   Simple as that.  One just has to think.

We were at an affair in Europe where there were very important people gathered from the country’s Tourist Board.   It was a black tie affair with the women adorned in lovely gowns.      I was wandering looking for a familiar face to latch onto.   I was walking up to a one when coming upon me was a handsome man with hands outstretched.   Why did you not tell me you were going to be at this affair! he asked.   I tried hard to remember if we had met and though I was still a youngish woman, my penchant for not remembering faces was legendary.  ( I even at dusk one day closed the door on my son telling him I gave at the office.  I never lived that down)  The man  continued talking and said last week when we were in Paris you did not mention you would be here.   I gave him my best smile and said I was not in Paris last week nor have I ever been there.

His handsome face turned dark and he said I was playing games because we had a lovely conversation.   But, I insisted,  I have never been to Paris and he kept insisting he was noted for his ability to remember faces and he would never have forgotten me.   My husband came upon us at that moment, needing to spirit me away for someone waiting for us.   I never have forgotten that incident because it has haunted me.   The man was a sober one, and chosen for his abilities to remember the various faces his position required of him.

I have been reading The Holographic Universe by Michael Talbot.  It is a book on quantum physics and new ways to explain the universe.  He says and I am paraphrasing, that it is disturbing to the majority of people who are so deeply convinced that our bodies are solid and objectively real, to find that perhaps we are will-o-the-wisps.   He says bi-location (often associated with saints)is the ability to be in two places at once.   Obviously, we all work on our sanctification all the time, for sure, for sure.  I have also read that when we blink we are in location elsewhere.  It all has to do with the space-time understanding.  We are more than we think we are and growing old I find at long last I am comfortable with my differences.  I know there will be a somewhere and a sometime when I will be at home.  There will  always be work to be done and worlds to create wherever I am.

But there will be a place sometime where I will not be on the outside looking in.

Look Often Into the Mist
An Invocation

3 Responses to One Of The Best Things