You are here: Home › And We Only Begin
By Veronica Hallissey on June 7, 2015 in Essays 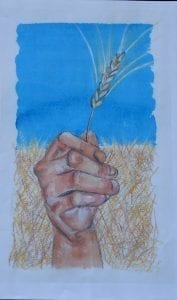 When I wrote the post for my blog entitled ‘I Would Teach’  it was about how I came to the conclusion that the reasons for our lessons,  if they can be called that, are logical consequences of our inadvertent or knowledgeable actions.  And the underlying basis has Intelligence and that Intelligence evolves as our intelligence does but in greater leaps.  Unimaginable leaps.   And whether we call this Intelligence God or Father or simply Life,  it is the primary factor of all the Universes.

It sounds like a simple conclusion to come to but I included also what I call the most minute as well as the largest explosion of life,  the God Participant.   For a more detailed explanation,  the post can be brought up.  But what I did not mention was that this conclusion with all of its ramifications has taken a lifetime to reach.   It doesn’t sound like much, but when a lifetime of steps are taken,  literally the footwork done,  and it is integrated,  along with sifting and sorting all the dogma that has been shouldered throughout however many lifetimes,  the footwork and head work is immense.  A humungous work.   To do it while raising a family and living a life with its own responsibilities, is a difficult endeavor at best. It has stymied many a stronger and bolder human than me.  Was  it necessary?  For me it was or I would continue on my knees to the bridge.    When one tries with all one has to make sense out of life and only nonsense was seen,  one must do something.   When my knock was not heard,  I crashed the gates of heaven.   And it was a put up or shut up kind of overture.   If what I was taught and learned did not work where I was,  it made little difference that it might work elsewhere.  Heaven took me at my insistence and for most of this lifetime,  I have been shepherded.   Everything teaches I was told.  Everything.  Including the heartbreak.

I have spoken of my Teachers in the previous weeks’ posts,  and I thought in writing about this underlying intelligence of the universes,  I would now include the response from them.   It has been a difficult thing for me to speak about,  but since my years are less in front of me, I want my understanding of this cosmic experience to be voiced.   We have had lifetimes of science doctors giving their understanding about what is normal and what not; I wish for all of us to recognize that mankind is more than psychology.   We have and are a spiritual entity.   And we are more than test tubes and litmus papers.  We are more of who we were when earth rolled into being and we were co-creators in the world of gods.   We were long before the world ever was.

The Teachers Speak. . . .It is a good piece of work.  Primary but in its substance of value some good thinking.  You see where it is you come from.  You see where it is that your thought springs and you cannot ever from this point on say that you don’t know from where it is you come.   You have at your fingertips the knowledge of what years of schools and instruction has stymied many a scientific mind.  There will be those who scoff at the simplicity of this page but you know how many years went into its creation.  You have those now who no longer scoff at what life presents nor prevents.

You have on these pages that beneath the life or the worlds, there is a substance or an Intelligence.   There is nothing that would stop the ever growing list of wonders to say  how did this Intelligence come into being.  Whether it is the big bang theory sending molecules into form, what we do know is that intelligence and common sense are its virtues.  We know we are not incidental to life’s picture.  There are other forms and other life cycles and we participate in all of them.  How we know of this intelligence is by observing the work of those whose business it is to improve life.  To lift the burden of existence to a tolerable level and to wave the spirit of triumph to what has been endowed to the minds that would not stop learning.   This is what it is to be alive.   This is what life is about.  We are placed in this environment to learn.   We are given the heads with its propensities to accomplish what the heart desires.  It is up to parents of these minds to grasp their importance and for themselves to learn the consequences of their actions.  You were right when you warned people to pick up their mistakes.   Their names are attached.  The sages will no longer say I did what I could and did I not have fun?  This is a classroom and this is what we do.  This is our work.   And we only begin.

A Rock and a Hard Place
And They Believed