You are here: Home › Stop it! Don’t Hurt Him! He’s My Brother!
By Veronica Hallissey on August 7, 2015 in Excerpts 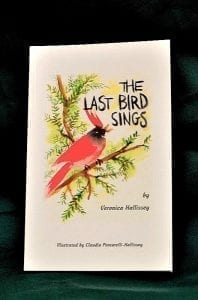 When much is given, much also is required. At what price, at what value is understanding?

As I look back upon the growth areas of my life, I still see the influence of the child within me. My family alternated between deep affection for me and a perplexity they could not reconcile. Mother often blurted out that she did not know where I came from nor where I got my ideas. She certainly did not teach me!

The clapboard house we lived in had a wondrous mystery about it. As an ethnic family, we lived in the cellar. The upstairs was kept for ‘good.’It was whitewashed with a large furnace in the center. Every one of us had our corners in what I see as a huge area. Things were done in a certain way and values kept. Within the nooks of the cellar my sister and I had a huge double doll bed our father built. Our mother made the doll bedding. Against the wall of the fruit cellar my brother closest to my age had his space. A long table braced against the wall held all his balsam models. They hung from the ceiling with wires and smelled wonderfully of wood and glue. One’s head became quite light and one had to come up for air periodically. This brother spent hours over his models with the sensitivity of a surgeon.

The balsam was my undoing and his. I would sneak a piece now and again and happily munch on the coveted pieces of wood. I can still feel my teeth gently smashing into them for the sheer pleasure. I would be on the lookout for these rare strips on the floor. But one day in a fit of craving I walked off with a section marked for major work. Possibly a wing or side panel. When my brother found out what I had done his anger was monumental bringing tears and loud voices from everyone. He was in hot pursuit for revenge.

Suddenly my father appeared with the cat o’ nine tails. My father held it and tried to hold onto my brother. I saw what was happening and screamed the scream that rang through the house and the door and into the ethers and no doubt rings there still.

And my father did not know how suddenly he turned into the bad guy trying to keep his daughter from being killed by her brother. I don’t remember that the cat o’ nine tails ever came down on my brother’s psyche but it did on mine. I swallow slights and injustices and they lay like iron allies in the pit of my stomach. My behavior was that of a thoughtless sibling but the fear and horror of my brother’s punishment was that of a god witnessing the violation of another god. I could not articulate it of course, but I knew intuitively.

My words? Torn from deep within, perhaps screamed lifetime after lifetime but elevating that portion of us in flesh.