You are here: Home › Staff Of Life
By Veronica Hallissey on October 9, 2015 in Essays 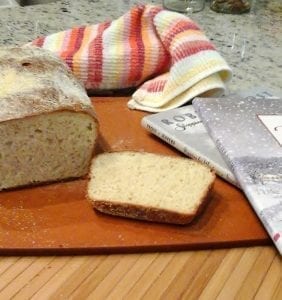 Unsteady on his legs, I watched my then toddler grandson bend down and pick up his book.  In one motion, he touched the book to his lips.

In another time, when I was young, I saw his great grandfather move with just such a motion to pick up a piece of bread from the floor and touch his lips.

And the great grandson connected with his great grandfather and for me, a moment where the gesture knotted more securely the past with that present.  I did not seek out the memory.  I did not know it was stored anywhere.  But in a moment of recognition and more  quickly  than  it takes  to scribe the motion, it was there.  In the act of one was the continuing presence of the other.

The source of reverence for both was what each considered holy.  To my father it was what was taught to him by generations of tradition.  To our grandson, still unsteady on his legs, one must wonder from where the reverence toward books was learned.  Was this bred into the genes at some time but  chooses when to show itself?

Or family habits observed carefully to shape attitudes?  If the latter, then we teach even when we don’t know we teach, which should put us all on guard.  We do not know who is watching or what is taken to be followed to the letter.

If attitudes also are bred into us, how much of what we are will be passed on to the next generation?   There are those who now say that while carrying the child, the mother should follow her inclinations and expose herself to good music, quiet thoughts and a welcoming attitude for the child yet to be born.  Fathers are encouraged to be present in the birthing rooms.  The welcoming committee should be on hand for mental and moral support of not only the new parents, but for the child to come.  Is it a bit far fetched or is there some truth in what was once considered old wives’ tales?

A cursory glance into the nursery will convince one that there is communication even in the newborn.  The infant demanding food disrupts the composure of the entire group.  A colicky baby oftentimes is discharged to the loving attention of the family rather than allowed to upset the “good” babies.  The response to a cry from one is a commiserating reply from all the others.  And the offender is soon labeled as such.

How far back do we dare go to understand the behavior patterns of each of us?  The parents who throw up their hands and announce in unison “he didn’t learn that from me!” are the same ones who say, “that is my father all over again”, but this time with pride.  How much of anything are we responsible for?

When we are aware that what we contribute is non constructive to a situation, the responsibility to change is ours.   Awareness demands responsibility.  We cannot fault another for not seeing what is evident to us.  But we can change ourselves and with compassion help to rewrite what we consider to be an unchanging destiny.

The needs of the elderly are close at hand.  And the needs of the very young are close at heart.  But each generation is privileged.  At no other time has the view been so clear.  And at no other time have the responsibilities been so sharply defined in so many areas.  I did not beckon the memory out of its hiding place to whip across my visual screen.  It was a simultaneous response, the one invoking the other.  And into the present a depth was reached that connected the great grandson to his great grandfather.

Intensity Of Purpose
The Uncovering