You are here: Home › The Significance Of The Common Search
By Veronica Hallissey on November 20, 2015 in Essays 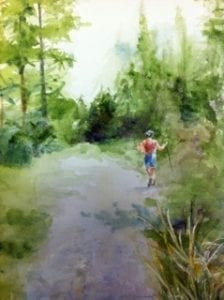 The Teacher speaks and the scribe takes dictation. . . .

As long as the desire to accomplish is within us, there will be sufficient time to do what needs be done.  As long as what it is we wish to do is for others and for ourselves,  there will be sufficient time.  Time being a space in this dimension, has its own terrible cost.  It is a tyrant.  It is also a whip that has beaten its own inhabitants to a pulp.  Never intending to be used in such a way, man has made it his master.  Never stretching it to cover his wants as well as his needs, he has filled it more tightly with things to do and when taken out of context without his personality imprint, is simply just busy work.

We can give meaning to our work when it is filled with love.  We can give meaning when in our own desire to make a difference, we stretch ourselves to fill in the holes in the work when left to itself means little.  It is our own imprint, ourselves, that give meaning to what we find to fill our days.  The other, the work that cleans the premises, that gives beauty to the eye,  takes the heartbeat of who we are also.  It behooves us to make our space shine for those who come by and who also follow.

There is much that could be done within the confines of our premises.  There is much work to be done with those of our commitments.  What we do with them is of importance when it is done from the heart and with our own best motives.  All else simply becomes work.

It seems there is within us, all the knowledge of longstanding, but with the passage of time loses its impact.  There comes the time when in viewing what others simply let drop, the feeling that it hardly is worth the effort.  Yet the perseverance and the sticking to it is most necessary for others to gain entry into the sacred place of the heart.  It is most necessary to keep the circle intact and the other pursuing, even when our own pursuits are fulfilled.  Our least dropping away will soon discourage others from their own even little effort.  And they in turn will think they are not worth the effort.

What this presents to the efforts of the earth classroom is failure ensured.  We cannot allow this to happen without repercussions, even to the babes.  The whole depends on the integrated pursuit of the aims of those  who go the route and tire.  We watch the entire procedure with calmness at times and then we border on hysteria.  For the workers are few.  They are not in great number.  They work with no conscious memory and when the lack of memories and efforts become too much, they fade from the picture with work still to be done and leave the majority who cannot get out of their own way, to themselves.

This in itself is of no great import singly.  But when taken to the extent that the lights are extinguished in the group and the hibernation begins in numbers, then we know there is little that will give meaning and direction to the majority.  The effort required to keep the lamp burning in those of influence and not necessarily to mean world importance, but by singular effort, is immense and sometimes so overwhelming that further work is impossible.  We then use what we can to keep the process intact and start the individuals moving again.

Even when the track record is evident, aging precludes the sustained interest.  But we adjure and constantly encourage prolonged effort.  We must.  For we have so few in the fields.  In the vineyards.  The larger scope must always be employed.  We cannot let not even one be lost to the place of darkness and mist.  We count on our people of light.  We must for we have no other support in a world of closed circuitry.  We employ every means we can to keep the interest high.  The personal input is of major importance.  The aging body works against us.  And the feedback for this work is nil.  There is no one who bestows the kudos on the heads of the menial workers.  The words of comfort and encouragement no longer are heard and the larger picture fades from view and what we have are the nuclear boundaries.  So what we ask seems impossible.  To keep on keeping on when there is arid territory to plant and feed and urge into production seems a monumental task.  Yet we ask it again and again, keeping the worker in the field in the face of obstacles that a high jumper cannot navigate.

They cannot measure their impact nor fathom their influence.  This is of the individual we speak.  Not only the producer of works that gain attention but also of the cogs in the wheel that keep things balanced.  ‘Only’ seems to be a very little word,  yet to the cosmic populace, the word becomes holy.  The ‘only’ includes all those on whom the workload falls, the ones who balance the entire lot of worlds precariously swimming.  We hold to be of importance the ‘only.’  They are the ones who are shunned as the so called movers of the world and cast into the place of no importance.  They are not called to the summit for conferences where the world’s conflicts are discussed.  Only called to Mount Olympus where the holy work of the worlds is parceled out.  There is the word again, ‘only’ in conjunction with holy.

No mail of worth comes to the door begging one’s presence.  No telephone call summoning one to the world’s conferences.  But neither is there the residue of regret, nor the hidden head in the sand hiding embarrassment.  There are, in fact, words hanging in midair of encouragement and those now willing to give it another try.  Another try and another try is what we ask our workers to give to others and to themselves.  We need the workers.  We need the ones whose vision contains elements not seen by the majority; the majority who yearn for role models of caliber.

We do not paint the pretty picture.  What we do paint is our need, the cosmic need.  The need to keep the classroom operative.  To give meaning to the dailyness of the population struggling with stress to find meaning of their own.  We know this and unfair as it seems, with no awards to hang one’s hat near, it is a work requiring doing and few know about.  When it seems futile, we ask again the workers to think again.  Instill within the neophyte the desire to improve one’s self,  one’s place,  one’s world.  The least effort is not wasted.  The smallest encouragement may be the encouragement that prevents total disaster.

The beds indeed must be changed to prevent contamination in a world of great numbers.  The babies must indeed know of those who love them and care.  The lonely soul trudging the inward path to procure meaning keeps another off the streets with the contact of one who has gone the route.  The beautifying of a relationship, the word to the lonely, the hand to grasp, the eye to contact is all the encouragement sometimes needed.  We cannot fathom the depths of life, of god.

Life, god, renews himself, itself.  Summoning all of himself, herself, to the work involved, he reveals himself to himself.  And learns of the depths of who he is.  Always in the process of revealing,  of revelation, of learning, we struggle as god struggles, as life struggles to give meaning and to ensure the depth of it all.

There is a depth still to be probed.  There is a deep still to be revealed.  And the human body is a marked probe waiting and seeking its own depth.  Nowhere can we begin the excursion into the meaning of what surrounds us and to what we cover except by the dailyness of the common search.   It is of no use to think that we can cover distances in a leap of profound understanding.  The elements of discovery are step by step.  It is a work and one of excruciating pain.  It never was said to be easy nor light  but what was said was that it was going to be deeply satisfying for one who struggles with it all.  No one comes through but with some store of experience which translates into knowledge.  Somewhere.  And here it is that what the individual learns is applied to the group as a species and then is integrated into the whole.

Man was told that what is done for one is done for all.  The lesson is profound when taken seriously and applied to everything.  Not just to the case in hand but to all cases and to all hands.  Keep it always forefront.  The individual effort is noted and the heavens are not deaf nor are they blind.  And the homecoming is worth it all.

We ask the blessing on this day and allow all things their space, for the simplest and most menial task is only so when glimpsed within the structures of the day.  When taken to its completion, it becomes a sacred work of art.