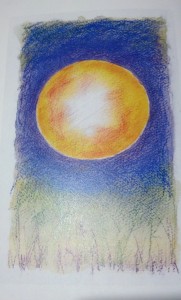 Back in the ‘70s when I awakened with notes written during the night  with the words,  ‘the past is still happening, the  future has already happened and here in the Now we race to catch up with it’ I barely understood what the words meant.   It was only in the past year I learned of the quantum theory that all time is simultaneous and as I approach 85 years,  it is only now that I know this is how I have lived my life.  It would have been a support of a huge kind to have had Religion or Medicine or Science as a help.  Not an easy way to make the journey,  but at birth there was already a blueprint drawn that determined my direction.  I stayed the route with its  heartbreak and joys and have found a serenity that answers my deepest questions.  In the poem Rolling Thunder I flex past and present and future tenses to show an unrolling of lifetimes that merge one with the Other.  To me it most clearly states how it is all the eternal now.  Life is everlasting and the sunrise is the suggestion of my youngest and sunrise indeed,  sparks our lives in all ways.

from what was a formless start,
were pieces sent scattering
into a nothingness. . .

Our consciousness spoke
one to the other and the thoughts
formed a place ready to hold our dreams.
We then broke off pieces of who we are and
went in search of meaning. . .

For sport, for something to do to fill ourselves,
for then we came to that place where thought
demanded a something to hold.
It was called Manifest.

This thought was like rolling thunder
with the threat of storm.  It was filled with power.
That power engulfed the whole of us
and we emerged.

We grew and contributed to this great turbulence
and life took on a beauty which ennobled us
as creatures of this space now forming worlds at once.

In the center we knew our sense of power,
like thunder rolling and even now continues
its unrolling of  events from our lives and dreams
and as it all unfolds it becomes part
of an Other’s dream.

The dreams are dreamed and pieces spark Others’ dreams
into an unrolling of the Great God’s Becoming.

It is with this understanding that the why and how has
neither a beginning nor an ending but is everlasting.

And we light up with surprise every time.