You are here: Home › The Confusion of Crossed Signals. . .
By Veronica Hallissey on January 2, 2017 in Essays, Poetry 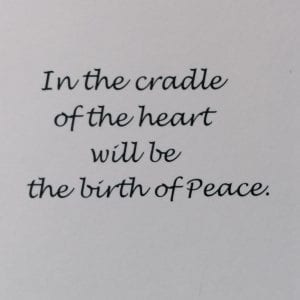 The Confusion Of Crossed Signals. . .

A young psychologist family friend and I were talking about the many problems concerning the young returning veterans in  his practice.  And the many suicides among them.  Remember when I said there were many grave problems and one of the reasons why was they had mothers and grandmothers like me.  My generation of women learned because of a growing sensitivity or simply growth in ways that have eluded the males, knew that teaching their children and grandchildren to play nicely and to love one another would take hold of their charges.

The crossed signals of what they learned as children and what the military teaches or is their persuasion is that love of country is first.  The confusion,  though unconscious, is immense. As children they learned to love one another but when they joined the military, they learned killing was appropriate in times of war.   But that being a problem in itself is one thing.  The thing I stumbled on next drove me to my knees.

I had lost my enthusiasm and could find no reason either to keep at my work which had kept me diving into my slippers when my eyes opened, as I had all the days of my life.  Coming to mind was the poem I had written on Life Everlasting.  And one of the lines when I truly understood life everlasting, was that I became very tired.  If it is meaningful to you then the following will make sense.  If not,  one day it will.

That we make our own reason for being,  for living, which is why there are wars and more wars.  Because it seems  better to common thinking to be physically involved and die young than to look for a reason to live peacefully without the excitement of the not knowing if you will survive.  Better to live with that constancy of motion and agitation than to live with no reason.  And always throughout history men would go off looking for adventure, for worlds to conquer and leave the women and babies at home.

They go off to fight or look for work but what they are really looking for is a reason to keep living and breathing.  Because with no action, there is no life.  It is not the war itself that is meaningful,  but the adventure and the action that gives meaning to life.  It is not so much the ancients’ griefs but the griefs which give them reason to war.  And put a name to it to give it not meaning so much but to make it appropriate to the activity.

How much of all the stress syndrome is the condition understood in the young that they found reason  in war and coming home found no action and the excited state gone and no longer keeping them alive.   They have to acknowledge that war and the family of buddies whose lives depended on them and their lives on their buddies gave life meaning and they felt alive.  And the real conflict of crossed signals that they lived with as children to love each other and as veterans giving them permission to take lives has never been resolved.

(My psychologist friend said that his colleagues had difficulty understanding this very concept concerning their patients but that I grasped it totally.  My Teachers had comments to this which I will publish in my next post.  But I had to establish what I learned when malaise and disenchantment grasped me and how difficult was working out of it.)

And when my mind
and my heart
and the fabric of who I am
accepted this statement,

I found I was very tired.