You are here: Home › Will It Be Me?
By Veronica Hallissey on January 27, 2017 in Introduction, Poetry 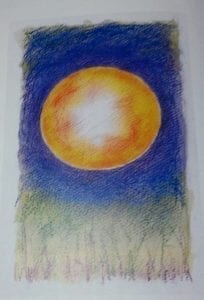 Jane Roberts in the 60’s and 70’s when I discovered her and her Seth books,  was talking about quantum physics.  She didn’t call it that but Seth was saying that all time is simultaneous.  And she had physicists calling her because even then they were silently interested in what Seth had to say.

And she channeled Seth saying  there are probable selves, all existing or living at the same time.  That there are bleed through with some of these selves and I write about them in my poetry.  And I am aware by emotions mostly,  of something going on that concerns me.

Like at that convention we had attended when a public official came to me in Munich and said when we talked in Paris the week before I did not say I would be attending this meeting.  I had never been in Paris and told him we had not met and he became angry.  He said he held his esteemed position because he never forgot a face or who he talked to!

So I write.  Of this life and from other dimensions.  I am not sure from where my thoughts come  that I am aware of things and how they seem to rise to consciousness.

I had spoken about these memories only rarely.  It is why I was cautioned every time I left the house.  Be careful what you say in public I was told.  I have since made friends with myself and now share my histories.

Will It Be Me?

Pulsing my perimeter are doubts
raising hackles to be heard and its twin
demanding not to undo. . .

Perhaps the only order is what we create
with rumor telling us that the world
was created for art’s sake. . .

There are brief, shiny moments where if I were
brave enough I would take my leave but they are
so rare they quickly disappear like a poet’s dream.

Could it be done where I would be
whisked away to that place farther than
the sun and closer than the moon?

It will be an emptying that fills to the brim,
a conversation with no words, hearing the cacophony
of silence and a chorus of angels pulling me home.

It will only be at that precise moment.
Every entry and every departure is a precise one.
How many came and how many will depart?

I formed the question only because I know the answer.
The pulsing is there and with it a haunting
that the answer pulses.  If I reach out, it will be there.

If I reach out, will it be me?

2 Responses to Will It Be Me?