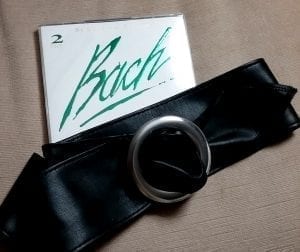 I was getting dinner for Sunday noon.  I was in the process of setting the table and finishing up.  I was listening to Carl Hass give his voluminous views on classical music radio when I heard him say Bach’s little suite.  And when I listened it was the same feeling I had when I first heard Pachelbel’s Canon.  If in a different time, I would have been driven to my knees.  I saw again the hall and the girl and the violins. It was the same feeling that almost drove me straight down or up.  It was the blending, the melding that comes with finding a time right for you.  ((the following I scribed as I wrote the entry describing the experience))

The time was indeed right for you.  But where were you and what were you doing?  (The gloves being pulled on the male hands.  White gloves.  I wrote about it in a poem.  The time was yeasty.  I used the same word when I looked at the portrait of Bach.  Was it the same as fermenting?)

It was a time of fermentation.  Much was going on and you were privy to it all.  Your ability to make connections and ferret out cause and effect is useful.  The times of the music were beautiful.  They spoke of romance and love.  Today’s world bears the fruit of its decline.

I wrote If I Could See Me .  It was a Given.  I wrote it as I heard it and saw it played in mind.  It was vivid at the time. Often when people tell me of their experiences that are vivid,  they immediately distract themselves.  It is unasked, it descends and often with a feeling of unease.  If held for a moment this experience can be healing, liberating and might yet save them.  What you hear and see cannot always be wrong.  Sometimes misinterpreted but mostly it is given for the preservation of life.  Hold it for a moment and do not be afraid.  It is given to you  with Grace and love.

I am conscious of a Presence
to the east of conscience,
bedded in memory.
A pair of white gloves
are smoothed over large hands
and the cutaway coat is laced with white.

A head of black hair, I see,
streaked with grey, thick,
but the face is cloudy
and the eyes indeterminate.
Somewhere time appeared
in the place and I lived in it,
with full participation,
now foggy except with a knowing.

Was I the you I see to my left?
Was I the someone smoothing
on the gloves in preparation?
If I was you and am me now,
who was the Other?
Is it a protection I seek, daring not to think
you were you and are now
to the left of my appearance,
to the east of conscience
only to rise from memory?

I could, with sweat pouring
from every body opening,
probe the memory, bedded
and know for certain what trails I left
for me to one day find my way back.

Perhaps you could tell me.
Was the affair as gay, as bright
as the confirmed costume of the evening?
Or was there sadness, presumed
and the memory stays
of that bright night to hide
what my face would reveal and yours,

if I could see me?