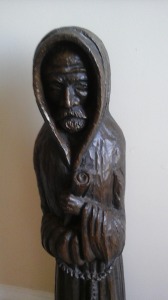 It was prayer
you held in concert
with the Great One
who marked your presence
on his counter of beads.

Talks, mostly dialogues,
it seems, and held court
with sages long asleep
on couches too soft for too long. . .

Rise!  You shouted
and they, appalled
at the sight of woman,
rose and were rightly
chastised.

They had forgotten
the bread lines
and the penniless people
and children’s bellies
bloated from hunger.

You brought them to shame
and now they remember
how the ivory towers
separated their lives from
the grime in the streets below.

Now you tell them
in languages understood
how deep the hunger
for knowledge can be
as if for bread; to keep alive
a mind from sleep;
(like scourge it contaminates
all minds of men).