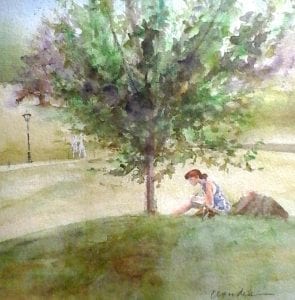 They were just children with a love offering.  It glinted in the ground and when picked up it glittered as a star in the sky.  Of course it would be given to the one loved most!  And with grimy hand and full heart it was.  With words accompanying the gift,  they spilled as starbeams through fingers.

It was met with laughter at the piece of broken bottle swept in by the now polluted waters, with the love words washed with even more laughter.  And the child ran and hid and forever found words choked in throat too tight to speak.  And chatter found its way into conversation during lifetimes of too many words, none spoken ever with truth.

Devices soon replaced the human voice in pillow talk and words were shouted in derision, in hostility,  in raucous laughter but seldom in measured voice which would take counsel with the sages.  Humans soon counted on one syllable words,  incomplete thoughts and reverted to gestures when language which had taken thousands of centuries to master came to a halt.  Even though in the beginning we were told that the  word is god. . . . we took away the child’s most important tool for growth and smashed it with our jealousy at his innocence as ours had been smashed.   And evolution stagnates.

THE WORD IS GOD

In the beginning was the word
destined to touch the mind of man.
But the prevailing Spirit in its wisdom saw fit
to encumber each with the power to discern.

Meanings floated into space,
shaping themselves to fit the receiving mind.
Reaching their destination,
their shape changed to fit the owner.

Such turbulence!  Such uneasiness!
Albeit because the word had taken life and risen
to meet the heart’s need.
The speaker’s heart had taken its intent
and placed upon the ethers the heart’s desire.
It gathered cadence as it rode
to meet the receiver’s prejudices.

The sender’s intent lay silent, lost.
The heavens only acknowledged
its primordial meaning.
Can it be said in truth
that the word be god?
It is.
For within its power to create
it moves with desperation to voice feelings,
to give breath to visions and to heal.

The word created creatures and dynasties,
wars and rebellions, held peace in abeyance
and brought us to life.

So speak softly when speaking.
Words carry the weight of the heart
with intent to topple empires
and worlds and men.
In the catalytic movement
of the word, the world’s heart beats,
years are gifted
and man’s future secured.

It is all we have.