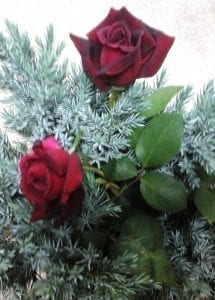 ‘How did you know to do it?’ he asked.
I loved and raised babies and painted roses
on their cheeks and planted evergreens in their hearts.

Now you should put the sabers
at the foot of the evergreens.
The dove sings high, gargles her song at times,
but you know my friend, you know.

In every time and place there is a one who will dip pen
in the heart and write.

The rose will bloom in December, I promise.
And I do not make promises lightly.

My Mentor, the Nazarene

(I knew that eventually I would have to define my god or what it is I have held as my truth.  Having been brought up in a traditional orthodox religious home,  from the beginning I was watched. And heard the apologies to the priest about what I was saying.  Somehow it is important I put into words that are understood what is my knowledge or what I came into the world remembering.    I overheard a new reader say he gave up on me  because he had to resort to the dictionary for every second word.  My favorite English Lit teacher says my language is often archaic.  But considering the ancient world I volunteered from,  to me it’s understandable.

I am not credentialed so my education has been for well over a half century a daily independent study program.  When my world slept,  I went to the books.  Thought given and integrated and practiced.  I cannot quote theories and postulates,  I write what I know and after much struggle,  am lightly editing my last journal entry of July 23, 2017 that tells how it is with me.)

We are given to speaking in a lofty language too so bear with us. What you are searching for is not without peril for you delve into territories best left to those whose ambitions list with the arch angels.  You form a doctrine also best left to the farmers of the soul whose intent is to feed the people.  You love your humans and do not leave them adrift.  But we educate.  Your dreams also are  lofty at times but we lift when we can and surprised are we at times.

What we can do is give you a premise.  A premise with teeth but not without bite.  You wish to give what people will find comforting and yet something to grow on.  And think.  Work is something people avoid when they can but we give it a go.

Ineffable.  That which is too lofty, too sacred and must not be spoken of.  Must not be spoken of.  Yet if we are to see growth and a planet not in peril,  we have to work.  Ineffable.  The rolling thunder of which you speak, the implicate and explicate is what the scientists call it.  We call it the core and outer limits of the dream as you say.  You wish to enhance or enclose with an embrace the awesome splendor of the love you find permeating. You live in your god since he is All That is.  The outside of you is the inside of his outside and this you knew from the beginning.  The awesome splendor of the embrace is what your god is for you.  Awesome.  It is a word that people use and can relate to.  Yet it does not answer the question why the killing of 6 million humans was not sufficient reason to stop one human.

You will not find a reason within human intelligence to explain that symptom of depravity exhibited by a human toward other members of his species.  How could your ten year old heart at that time be ravaged by its knowledge and not the god to whom you were given for safekeeping?  Though your parents held to the Grandfather God concept,  you did not even then. What you ask the human mind cannot grasp.  But maybe we begin to explain how goodness can operate without emotion and still be considered above evil.

It seems the word ineffable stems from being not spoken in terms of outside the sphere of sacred.  Sacred is common with you.  Beyond sacred is ineffable.  Not spoken of.  You find this difficult; hard to live with a concept beyond the realm of speaking.  You think and therefore have the right to speak providing you intend no harm to the house of another nor to break the rice bowl from which he eats.  So we adhere to these concepts.  But there is a realm of existence so far beyond where we are and you are that it cannot be spoken of because there are no concepts beyond the immediate conceptual. Simply Is.  All else Is.  Or are,  steps toward getting nearer to that place where awesomeness will begin to conceive a form holding yet further realms of thought not possible.  Realms of thought not possible for the human brain.

It seems nonsense and yet,  yet,  ineffable is the word to use.  Too lofty, too sacred and not spoken of because there are no words in the human lexicon,  dictionary able to describe.  When people speak of the god they believe in who has a hand on their shoulder it is a leaf that they feel and lean on.  A leaf.  The tree itself is a mighty redwood of understanding with roots going down levels of life that consume Every Living Thing and whose height is above sight.  When man says there is no god he does not feel the weight of the leaf yet.  He still has many lives to go to get to that point.  Ineffable.

You see the word in conjunction with the mighty redwood.  Man is a lightweight against the leaf but when he feels it,  it is progress.  For there now is the presence of Conscience.  You see the sacredness of life and the child hurting.  Many have not reached there yet,  thinking still that all is a match of chemicals,  hormones mostly that propel humans.  Humans you say are divine and place them in Genesis where the beginning was.  They cannot assimilate that information and cannot relate.  Knowledge rises from within and is a Given.

Ineffable.  Beyond the scope of humanity because there is no form, no concept of the word becoming.  God is a thunderous roll of Becoming Yet To Be and that is why minds say that life is everlasting and everlasting.  The residual of that thunderous roll to becoming is left within Mankind and is the god within.  The leaf maybe they feel.  That they humanize that weight and say their grandfather god will open his arms to them may be all they can handle at the moment.  That there is a stronger someone than they is what they need.  Someone to justify them.  And what they do.  And even if what they do is not good it may be what their human father commanded,  wished,  or taught so they are obedient to their human father god.  You see the evolution and why it stagnates.   Education is required for growth of the human spirit.  We begin again.

The Vault of God

And the inside is the outside
of the inside of God and I am he, or it or she.

Just as my children were part of me, the
outside of me, while inside, yet separate.

I am they, that part of me that flows
through them, yet are they separate and

they are part of me, an expression of
who I am, yet separate.

With my memory bank, just as I am the
holder of my mother’s memories,  I am

expressed himself through me and I am
the holder of memories.

(I told a long time friend that for me God is a verb and Jesus is my Mentor  A verb cannot cuddle nor is a comfortable pillow.  But I was not then at the place of rolling thunder yet nor where all time is simultaneous that quantum physics espouses.  So there was a lot of growing to do and much living yet to thread through.  My mentor became my friend as I was held accountable and as I sought his divinity,  I found mankind’s, and my own.    In the Dead Sea Scrolls (The Nag Hammadi Library)  Jesus said ‘I shall give you what no eye has seen,  no ear has heard and no hand has touched and what has never occurred to the human mind.’   Even with no credentials and whatever our persuasion,  we all have a highest and best we hold onto.  It is a good beginning.)