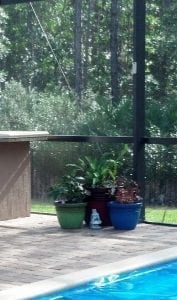 My journal entry says it was a Tuesday when my world folded onto itself, the trees blending into oblivion and the screen folded onto itself.  I was in a place as close to a cabin in the woods as I could be.  I loved it.  It seems I have been a recluse in several lifetimes and in this one it still was an effort for me to mingle with others.  As the world faded from view for the last time, I felt within, whole, and that I could step over whatever boundaries were beneath me.  It was the way I entered my nights voluntarily and traveled.  I lost it then because the next I knew were burly men shunting me over a gurney and into an ambulance.  ER became a reality as did the next days.

Part of a whole,
yet wholly here.
Slowly as I watched
the silence was encompassing.

Piece by blessed piece,
each tree, each entity
slowly folded upon itself
and laid itself down.

The screen protecting
vanished as it bent itself
into nothing,
a wisp of an idea
no longer useful.

Trees,  one by one,
bent over themselves
and laid themselves down
and disappeared onto
the forest floor.

And I thought now neat!
No evidence, no residue
of debris to litter
the surroundings.

And time collapsed for me
and events catapulted me again
into the frame of reference
I know as mine. . .