You are here: Home › Reverence For Learning. . .
By Veronica Hallissey on October 14, 2017 in Essays 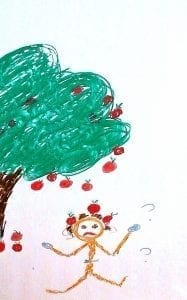 If I was to be an earth shaker,  I would first shake man.  I would have the apples fall down on his head again and again until some sense would come from the constant bombardment.  I would ply him with this food that tells him who he is.  I would have him search his inmost self with the intensity that would move mountains.  And I would tell him that all he needs to make his world a fit place to live is to first know himself.  But that has already been written, hasn’t it?

How to get him first to look within, to study his own motivation and to dispense with his own alibis before he can begin to attempt to disassemble his brothers.   I wish I had the ability to write what is in my heart.

I wish that I could roar from the top of the highest mountain, the highest building in the cities of men, to tell them of their cosmic connection, of their divine origin and let them bask in their own glory.  I wish, I wish, I wish.  How do I do that?

How do I tell them that their god is all that they can wish for?  That their brother is indeed themselves walking the path that will lead them to the mansion of many rooms.  That their sisters are truly sisters and color neither separates nor delineates their origins?  How can I even venture to tell them that their godhood is within and there never was  reason to believe otherwise?  The Master told us that.

How can I tell them love has all the potential of healing the mystifying elements of earth life and  they would indeed no longer be the enemy?  Where is it said that man must crawl on his belly to be able to stand in the true reflection of what is his birthright?

(I wrote the above in a journal entry on September 6, 1982 when I was 51 years old.  I am now 86.  Many times I have written of my Independent Study Program which I have continued  daily since I became a parent over 60 years ago.  I felt our children were special and I wanted to be equal to their needs.  I began my ‘need to know’ seriously.  I wanted to answer their why’s adequately and with knowledge.

I did not know the depth and height this journey would take me.  I did not know it was a journey.  Only now I realize in working to cross reference my work of 60 years,  that the injustices I have seen throughout my life are now surfacing onto the international scenes.  I see support systems coming to life with hope for the future.

The above thoughts have deepened and broadened and integrated in my philosophy. I was mostly silent with my thoughts because they were unusual for my day.  Being told I was out of step I now find the opposite to be true.  I have found as those in ancient days that the inner experience is our most valuable guide.  The heart’s intent with clarity is the valid one.  All of life’s experience cannot be proven in the laboratory).