You are here: Home › All Time Is Simultaneous. . holographic universes. . .
By Veronica Hallissey on November 1, 2017 in Essays 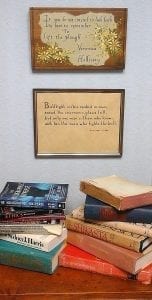 June 17, 1984 journal. entry edited only for space . . I was sitting in my chair at the dining room table reading the paper when glancing out the north windows I caught sight of Michael emerging out of his green truck.  He was drinking water out of a peanut butter jar and the setting sun shone on his curly head.

I yelled to him as I heard the gate slam and told him to wait while I put Princess in the basement.  I then went to the kitchen door and found him standing and looking at the paint job on the house.  He came in for a minute still drinking his water and I showed him the drawing  of the patio cover we wanted.

He then had a call from his daughter to come home because there was someone to see him.  He left and walked down the back yard walk.  I yelled to him that he parked his truck in front and he said his truck was in the alley in front of the garage.  And he knew where he parked his truck!  I followed him to the back gate and sure enough, his blue, blue! truck was there.  The new flat bed.

I heard the words simultaneous worlds in my head.  And knew that for every aspect of my world here there is another impinging in identity on it.  Though sometimes not up to date as with Michael’s blue truck which was only two weeks old.  But it was in his green truck I saw him pull up front and talked to him at the gate.

Later that evening family friend John stopped by.  I raced to put Princess again in the basement and went to open the front door only to find John not there.  Ten minutes later he drove up and I asked him where he had gone.  He just left home because he had been packing but according to my vision,  he had already arrived which was why I put Princess in the basement.

It was not until 2015 that I read Michael Talbot’s Holographic Universe and realized that all my life I had walked with one foot in other worlds.  Quantum theory talks of time being simultaneous. The past is still happening and the future has already happened as we race in this present to catch up to it.   It is a difficult concept for most people.  Linear measurement makes it easier to learn when things appear stable.  That they are not is the reality.  We do ourselves and the worlds at large a huge favor when we push the boundaries out to allow beggar’s room for our Spirits to expand. We are different but our intent is to do good.

It would have been a comfort in my life to have a hand to hold that understood this concept.