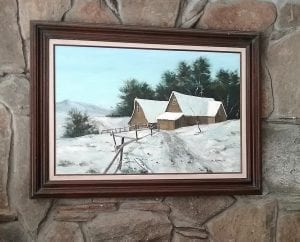 In the sixties I wrote a poem called Resolution which ended with the following lines.

I have come into the Light
but what to do?
On the day I was one, I became two.
Now I am two.

And following ten years later I wrote having chosen the Nazarene as my mentor. . .

You said that when I knew you,
I would know me.
We are gods on common ground,
knowing we choose our own Golgotha.
Seeking your divinity,

I found my own.

(from journal entry October 16, 2015. . the teacher speaks.)  and the god within had a voice needed to be heard and accounted for.  You wrote those words a half century ago.  Yet you never tried to unwrap them because the need was not there for them yet and neither was there the courage to respond with a yeah, now  I am not godless.  You have the Within God and this has been the secret with the many. You have known of it for sometime and long before you were already talking about marching orders and that was when the children were small and needed the teacher mother on hand to give them their enchanted childhood.  You know even now that you were given the necessary guidance at the time.

We know the involuntary knowledge puts you on some edge of something.  Should you stand and speak for the god within what would you say that would be convincing?   Does the average person want the tyrant task master of your life who has been your goad for over 85 years?  Coupled with your mother’s jenny genes?  What of those who find that they can talk down the desires of that inner god and outplay him/her and quiet their conscience?

I asked my friend Kath why she went to church on Sunday.  She said she hoped that what Jesus said was true.  Knock and the door shall be opened.  I don’t think a knock would be heard in these days of devices and loud noises.  I had to crash the gates to be heard.  There is a Comforter or a god within that is to be heard bringing to mind all we had forgotten to remember.  A friend laughingly said it was an argument as to what we remember and what we need to learn.  A need to know was my ohm and armor.  And what kept the bridge at a safe distance.