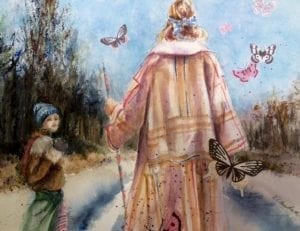 If it was a certainty that world creation was a fact, what kind of world would you create?  If you knew for a fact that your acts upon days upon days created just such a world, how would you change your behavior?  And what would be the attributes you would enhance that world with?

Children will learn early that actions have consequences.  There will be high standards and they will be considered the norm.  There will be values carved out of your heart and experience.  It will be a world of moral values and high hopes and the joy of learning.

And to sustain life,  all systems will adhere to functions that steward the world and Nature in harmony.  It will be a place of growth and it will be matched by those whose values are similar.

This is the world of your graduation dreams.  One day it will be a fact we work toward because our father’s house has many rooms.  But we were told that but did not know we were all in the creation business.  How special will your world be?

This is a world made manifest
by yearning to touch what
the eye could see.  To be felt
only by hands tender as a baby
still fresh from the womb.

It is the world of thought
that brings forth the birth
of worlds, similar.

Without the need of
fulfilling vendettas, old wars
never fought to frightful finishes.

It will be a world of fresh grasses and
clear waters without the threat of toxins
to maim the brains of those too young
to complain and voice their wishes.

It will be the world that thought
brought to bear on hearts long singed
by ugliness.  Look toward the graduation
of a soul whose transit bears relation

to what life has chosen to negate.
It will be a graduation
of merit, a time for fruitful finishes,

the resulting birth of a yearning heart.