You are here: Home › Does The World Stand Still For You?. . .
By Veronica Hallissey on December 1, 2018 in Essays, Poetry 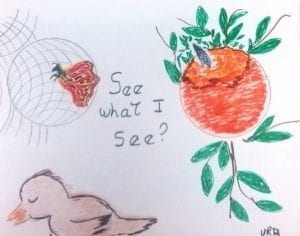 If memory serves me, the one thing I learned from what I have been told is that no one thinks like I do. Trust me,  it was never a compliment from the time I was a child.  When I first started this blog in 2011, I started with this poem.  I excerpt.

‘How heavy is a spider’s web
on a butterfly’s wing?

Since everything is balanced,
the question is proportional.
A friend said to me, only you
had eyes to see it.

Does the world stand still for you?’

This morning I was at the kitchen window looking at the orange tree and thinking creatures are eating the oranges by gouging large chunks and eating them still on the branch.  And I saw then a tiny bird sitting on an orange and pecking into the gouge and having his morning juice.  He was barely seen in the leaves.  But certainly too little to break the tough peel of the orange?  A minute later he flew off.  I gave my thank you for this sight.

Just as I thought my Maudie Dove blinked but was uncertain,  the next morning I watched her and sent my question out and sitting on her nest, she blinked.  Several times.  I had been told after I noticed that when I acknowledged the bird song one morning that the song halted momentarily, that indeed the thought was accepted and appreciated because the song begun again.

This connection to my Earth is one that I cherish.  It will be in my memory bank forever.  We are unique in our perspectives  and each step in our evolution puts us ever closer to what our potential is.  There is no ultimate, there is only growth.

I excerpt another poem called ‘The Moment The Star Fell’ which shows the ongoing quest for answers that have fueled my life.  The question could be anyone’s question and it matters not, but the journey does.  This was a Given and you will see your thinking in it.

(Excerpt from The Moment The Star Fell. . )

I see you search the southern sky
closest to your bed and against your will,
hope a star will fall, just for you.
You think you will know then.
But you will not.

For in the morning you will hear
of a meteor or a similar explanation
to salve the mind of man who thinks
only his world is truth.  And you will doubt.

Yet you will think, ‘ but only I knew what my heart
required at that moment the star fell’. . . .
and then you will doubt again, for they argue
their arguments to convince.
But within the place of rest,

how could you not know?

3 Responses to Does The World Stand Still For You?. . .