You are here: Home › good and faithful servant, Thou Art. . . .
By Veronica Hallissey on January 9, 2019 in Touchstone 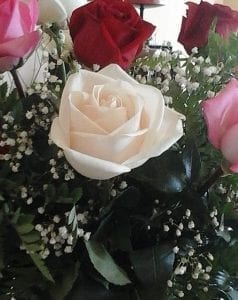 It was a new friend Jan who remarked that she knew I didn’t know we were different.   And I remember feeling hurt that again I was on the outside looking in and now my children were also outside the circle.  But as she continued to be my friend and my trust strengthened she pointed out things that were different.

One thing continually amazed her was that we talked; the boys and I talked.  She pointed out that most  young people did not talk to their parents.  But she said you actually sat at the table and talked to each other.  But since the husband and father was out in public doing what he did, I was the parent on premises.  And our conversations were enlightening to me.  They were good teachers.

I remember when a grandmother visited and I was on the phone to our eldest living away, when I hung up she asked what I found to talk about  since she and her son did not converse except tersely.  I was astonished at the question for there was never enough time to finish a conversation.  When I mentioned this to the eldest, he said  we have been practicing for over 30 years!  In a nutshell,  all the time, practice.

Individually the separation from peers began in kindergarten, with invisible friends we think  was what everybody had.  New insight, new knowledge, new subjects to pursue.  Trying this, trying that,  giving everything a try.  Making do with what was on hand was a prerequisite when money is scarce but ideas profuse.  Questions such as how did you know to do that?  Or how could you?. . .whatever you did.  Who showed you and where did you learn to? . . .whatever.

Some results were met with derision.  Some were met unbelievingly.  He was four when he looked up at the sky and saw contrails splitting and said with awe.. . like a zipper opening the sky!!!. . .the one with a pen.

He was only three when I saw him on the floor with the newspaper open to the stock page and asked him what on earth he was doing at six a.m.   He said I am checking my stock to see how I do. . .meaning he had been going to the mailbox on the road also in the dark to get the paper which frightened me more.

And the younger was hardly past a year with his father’s belt wrapped around him with tools from the kitchen as he climbed a tree.  A spatula, a serrated bread knife for a saw and some kitchen shears pointed down as tools should be in the belt of course and tongs for heaven knows what.    He was wedged securely in a Y branch.  I know-ed he said, I know-ed.

I had wished for a mother who understood what I did when I was an eight year old on the grass and willed the clouds to form mind patterns.  She could not understand this daughter who wasted time doing nothing she said.  When the boys were born I knew the kind of mother I wanted to be.  Enchanted years the writer son said.  Enchanted.

Embrace the differences I later wrote.  Embrace the differences and give evolution a run for the roses. This is what will clean up the detritus and keep the classroom alive.   And the responses have me on knees that bow to the Divine in us all that has continued to serve in spite, despite the inhumanity that threatened these differences;  good and faithful servant Thou Art.