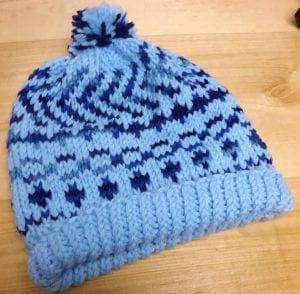 You think it is a neat hat?  My numb hands brought forth a memory of how to knit this after 50 years. Many dislike old talk but when one is trying to adjust to a life of diminishing returns,  there should be some straight talk about how does one cope with it all.

Mine has been a life of chronic physical disorder since I was ten.  A year and a half in a sanatorium when I was 8 years old and a steel back brace through teen years.  (I was mortified when boys smacked me on the back and yelped with mock pain to embarrass me. Not fun.)

Bone problems, arthritis, stenosis,  muscle inflammation, all chronic, then 2 cardiac arrests and 3 strokes. . . In 3 months I will be 88.  And I don’t know how come since I read like the Table of Contents for Contemporary Medical Conditions.

Coupled that with a head that saw too much and heard more than was comfortable to live with, a world crumpled that required medical help to allow me to function normally.  Physical pain I learned to suppress;  both took enormous endurance with ongoing learning.

One doctor had to resort to a scalpel to remove a deep sliver in my hand.  It took awhile and when he was through he asked how I did it.  What I asked?  Not move nor cry he said.  I step out of my body I said.  He looked at me horrified and turned and slammed the door as he exited.

Many of the doctors called me mystic.  My definition of mystic is one who is born to a new world  but dragging one foot still in the last world.  Hard way to live, but one can do it with diligence.  Or one flees to the forest as I have done many times, I hear.

But one can be an ordinary person, in an ordinary family, in an ordinary life.  This is what the public sees. But it is not a life like others live.  At some point it spills and the cup runneth over.  The answer is that it was worth it as every life is.  Just different, that’s all, different.  But of worth.

So it has taken some time to mentally write my book of lamentations.  Lest my readers think it is a make believe world I have created, I built a philosophy from the ground up.  It had to make sense with a life filled with non sense.

Critics say it is a philosophy created to make palatable issues life presented.  Which in itself is a small miracle.  Another says it is swiss cheese with many holes.  But he does not see it from almost 90 years or aware of the mountains climbed.  Another when transiting this world asked how did I know to do it?

All I knew is that I had to have a something to uphold me because there was nothing in my carpetbag.  When a philosophy is carved out of the heart, it upholds mind, body, and spirit.  It has demanded much,  but I have given it my life.  There are moments glorious but mostly my world of joy I learned is what I bring to the table.

One would think that after centuries one would have living down pat.  Not so.  The mills grind slowly we know and there are no skipped classes.  There have been lives not fit to live nor fit to live with.

I now hear only 4 out of 10 words.  I work hard even with hearing aids to hear human voices.  I learned to read body language, facial expression, eyes, even telepathy and still miss messages.

Often with solitude, musical ear syndrome is an aging problem with unfinished arias in my own head’s inner Julliard school of music along with ongoing noises from the gym’s open doors at the end of the hall with games in session.  It is muted but audible.

The specialists say the only way to cope with the ear syndrome is to flood the head with loud music. The body’s innate sense is to fill the vacuum.  Try that while hungering to hear your muses. . . .

One audiologist understood what I talked about and asked, does it interfere with your life?  No, I said, I have learned to cope, but it is tiring.  Another said,  my god, you work unbelievably hard at hearing, don’t you?

How to focus on deep thought when all else impinges on consciousness?   With an open head there is the invisible as well as the visible world to contend with.  The footwork with learning that short sentence is a life’s work.  I also must remember the bread baking in the oven . . along with what’s for dinner????

Hearing aids accent sounds of the house but sometimes the brain has difficulty registering human voices.  What did you say?  Say it again. . please?   No offers yet to wear my head. . .

Solitude is my companion.  The inner theatre of mine is rich and for me, understandable.  I have learned much and brought forth by deep focus things forgotten.   Aging numb hands have moments of memory also and when you cannot stand long you can sit and remember old things to make new.

There are things still to learn and life continues to be good.  Again, just different.

One Response to What I Bring To The Table. . .