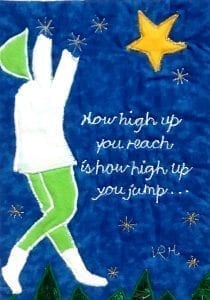 (Excerpt from a letter)

From what I know,  because my own hero’s journey was strewn with rocks and unbelievables, and has taken a lifetime,   I want to say if it has value,  mull it over.   If it does not apply, discard for the moment.    My good friend Jan often said,  ‘don’t laugh,  this time next week it will have meaning.’

When I thought about the young Veronica, I grieved for her.  I still do when I am melancholy.  I tried so hard and never measured up.  I was told what I grieved was my loss of innocence.   I realized this was true.   One of the things learned is that once you know something, you cannot un-know it without due process.

And if it makes sense to your mind and heart, it is impossible to un-know it if it was meant for you.  It was a real loss to me because it affected all of my life.

How I looked at people, wondering what they thought and didn’t they realize such and such, whatever the moment ordained.

How I looked at my Earth and loved it so, why did not my parents and siblings know what they were doing to each other, since it affected everything.

In losing my innocence, I lost the ability to take things for granted.   It is with a bend at the knees gratitude I live with for every moment, in the love I am given not only by my visible beloveds but also in the unseen world who are beloveds also.

Once you knock at that door for answers that the visible world cannot give, you open the door on a vast unseen and denied world of most of humanity.   You live differently to begin with, and you think differently and then must put all facets of your philosophy into question and rewrite your Self.

It is not called the hero’s journey for nothing you understand.   Most people want what you gain but they certainly don’t want the work.  To this day my light is on till after midnight.   I must take breaks because this body falters.

When the heavens see a light bulb go on in a human mind, they exalt because they have a live one there!  And they do not let up.  Not much anyway.  If this helps, use it.  If not, file it away and drag it out later on.  There was no one,  neither family nor friends to talk to.  I am grateful for both though.

Like the flyer who said he broke the surly bonds of Earth and touched the face of god, I follow him and say I too broke the bonds of my earth but headed straight for the mount.  Olympus, that is.  My Need to Know drove me to my knees because like Lincoln, there was nowhere else to go.

Added this day. . . 3/2/19. . . It had to work in this world where I am or for me there was no truth.  I did not know the change was to come in me.     (a sidebar to this:   in laughingly talking at the table our lawyer -philosopher member said they would not have to chase down letters when I became famous or infamous because I carbon copied all letters.  This is why this excerpt from one of those . .  the typewriter days.)