You are here: Home › Every Day Is A Beginning. . .
By Veronica Hallissey on March 6, 2019 in Excerpts, Introduction 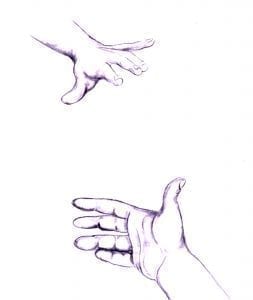 I was asked to go back to the first journals to throw some light onto the path I had taken.  When approaching the last decade of almost a century it is hard to imagine me ever being young.  Coming into the world with an open head, meaning one with vivid memories, it was an old head to begin with.

So when I speak of how it was, I kept journals and speak from my written word.  Lost somewhere was the first journal handwritten in 1963.  The poetry survived two floods and I began the 1973 journal with the following poem written in the 60’s.  I was a mother of three sons and in my late 20’s.

The mist that sustains me
sustains my images also.
Perhaps I am the illusion.
Perhaps I will find myself
greater than my images.

How many of me are there?  I always knew this intuitively but when I wrote the entry, I knew intellectually the meaning.  I edit for space concerns the following written in January 1973:

‘Would it be possible to meet another me somewhere in this time?  I know I am ‘locked in time’ and nothing is ever lost.  We are so attuned to linear measure with past, present and future, and yet everything is in the NOW.  There is nothing in eternity that is not contained in this present instant.’

Since I started blogging in 2011, I have mentioned many incidents and experiences to introduce my readers to why my thinking is perhaps unorthodox.  I have related that in a convention held in Europe I was confronted by a man who worked for the Government of the host country with why I did not mention I would be coming to Munich when we talked the previous week in Paris?

I have never been to Paris as I wrote and he was incensed that I would question his veracity because he was upheld as excellent in his ability to remember people and where he saw them last. It was a high level position because tourism was becoming important to the economy.   And our talk was a delight to him.

It was in 2015 that I read The Holographic Universe by Michael Talbot.  I learned that I lived the quantum theory all my life.  The premise of quantum physics is the past is still happening, the future has already happened and we in the present are racing to catch up.  All time is simultaneous.

Every day is a beginning.  We don’t necessarily need to throw the baby out with the bathwater.  Some things are meant to be saved.  It is up to us to know the difference.