You are here: Home › The Morning Will Rise Triumphant. . .
By Veronica Hallissey on April 17, 2019 in Essays, Touchstone 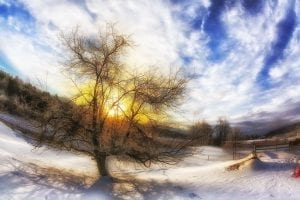 What to do when there is no one to talk to.  We often escape in old age I fear into madness that we call  Alzheimer’s or dementia, still, a madness by whatever clean name we now give it.  We once called it hardening of the arteries it seems.

Where to go and who to talk to?  Understandably there is only conjecture and science forever studies the subject.  And how often we hear of the brave ones who keep their troubles to themselves?  We think we should be one of those.

I think it goes back to our origin as children when we asked the first why.  And the exasperated and hopelessly uncurious parent said because I said so that’s why!  Then we spend an entire life with questing the eternal why.

And when it becomes too much, especially when we have a near death experience and we look for someone to talk to, there is no one around.  The religious professional admits to no answers.  The partner of a lifetime wants no part of this serious stuff and should you venture into it they call it pontificating.

And do not want to hear you say your nights and days have at their root what you pursue.  It is your eternal why for whatever reason you cannot fathom and hit the wall.   You bang your hard head and crash the ethers finally.

To end up with the millions in no man’s land with what they say is a brain malfunction but it is with relief so you don’t face the final agonizing times alert but still with no answer to the why.  You offer a heart and love and your Self with questions and it is too much of a burden for an Other to carry.

So what to do. Study.  Go to the library and find the books on the metaphysical.  Go back to school.  There are counselors exploring broader histories.  Confront the memories and learn about lifetimes with different images .  Search and embrace the ancient civilizations that know there are lifetimes hidden in the crevices of who we are whose secrets can be uncovered.

We are more than what we appear to be.  Everything we have been,  the good and the not so good have created the who we are today.  And as we look upon our progeny with love that we could not have imagined,  know also that hidden within their selves may be the ones who did unsavory acts that caused grief.  Forgiveness takes on a new meaning in Holy Week.

But because of who we are today we take them into arms that have known a love so grand that we transfer that love this minute.  That love we have known may not have been in our present life but rises out of the ashes of who we have been and kept alive in memory.  And we live to show it, to have it guide us and make it work in this time.

To be called gullible, not knowing the real world and naïve to believe that love conquers all is a lot to handle.  But as the world teeters on the brink of an edge that has an abyss awaiting, and still with hope celebrates the resurrection of the Spirit within believer and unbeliever alike, we are grateful there are those who have memory and perseverance to pursue the command  to love one another.

Simple?  Never.  It is a reality we cannot dismiss because its power is unfathomable.  And the morning will rise triumphant because of the dark night.

A Thud Against Our Heart. . . .
Everlasting Life: caterpillar to butterfly. . . .

2 Responses to The Morning Will Rise Triumphant. . .