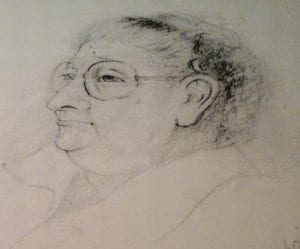 She was a formidable woman with a bundle of energy having the potential to create another world.  She wielded this energy with considerable force.  That said, the heavens took note of Jenny and decided that this creature would not be wasted.

And she wasn’t.  Hand in glove she pushed her progeny.  Told them all what to do and how to do it if they stumbled.

And marched them to church, whatever one was closest because her god lived everywhere, in the barnyard, in the fields, in the orchards and in the house.

She feared the health department would hang a contagious sign on her door unless we were brushed dry with a stiff brush.  Altogether, she was a force to contend with.

There were no hugs, no I love you in my childhood.  She believed the movie star as I read to her from a magazine that I bought with school milk money when he said he only kissed his children when asleep.  He’s right she said.  Let other people praise you.

She was in the orphanage at five and did not know of love.  She knew of work at eight years because that’s when the foster family took her into their house and barroom to be a live-in helper.  She knew that no one feeds you for nothing as she often said.

But memories are built with the security of the aroma of cinnamon breads and mince pies and angel wings with powdered sugar like the dust of stars.  She manifested love in the good work of her hands. Home and children squeaked clean of her caring.

The warmth of newly polished stove pipes was sent throughout the house.  Everything was fragrant including us children with the scent of Sweetheart soap.  Holidays brought the pungent sharpness of evergreen and unbridled excitement of eight siblings.

What the parents didn’t know of love, we siblings brought our histories to teach each other and even our parents.  They knew to care for what they brought into the world, best as they could.  The public-school nurse marveled at us with our white starched clothes and wondered how our mother managed.

The last days she knew I walked with one foot in other worlds so was able to share openly her departure.  It eased closure for us both.  I now watch the jenny genes in all her progeny as they reveal themselves.

Not a walk in the park but I hope they find as I have because life demanded it, that she gave to us an unbelievable strength.  With gratitude,  I am your daughter, Veronica