You are here: Home › Even The Inanimate. . . God Participants All. . .
By Veronica Hallissey on June 3, 2019 in Essays, Touchstone 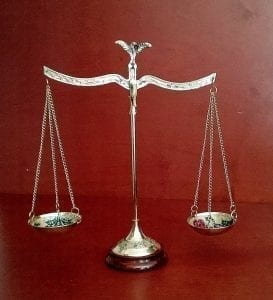 With my coffee I sat and read the entry stating vengeance is mine saith the Lord.  And to me it meant balance.  Man was at the place of growth at the time, with the concept of balance needing to be introduced.  And for man the concept had to come from that greater something man worshiped.

A growth commensurate with the intelligence sparking would be compensated.  Meaning that what is taken illegally, (stolen) unequally, (cheated) taken as usurping an Other, that there was an internal set of scales judging but yet undisclosed.

In other words, mentally cognizant or not, there is a balance weighed and known.  All these must be understood as concepts that had to be learned.  They were not born in man yet.

And no one gets away scot free.  There is a measuring up at some point.  What is taken is given back or compensated mightily.  There is no getting away with anything.  Vengeance is mine saith life in total.  It is such or life in any form would no longer be.

Throughout the universes, throughout, there is balance.  There is an intelligence that directs and dictates within the freedom of free choice.  Hoping against hope, life in any form will choose what is good for the ALL.  No halfway measures.  There is no it don’t matter dictum.  For it all matters and there are individual consequences to be attached and paid.

The reason is growth.  There is nothing junked.  All is itemized and noted, and all is destined for good.  It has to be, or we would be no more.

I have not the words, so I am not saying it right.  There is balance dictated by the underlying intelligence as I wrote in the June 7, 2015, We Only Begin post.  Intelligence is the primary factor of all Universes.

Not a thing to be taken for granted, as a nothing or non- life because we have as its center, life, the smallest particle, which one day grows into its full capacity of intelligence.  To whatever end that particle succeeds will be another meeting of parts where in its composition will again grow toward other forms of intelligence, other forms of life.

Like God in a Rock.  Because the inanimate, the least seemingly alive particle has within its substance the desire to unite with and ultimately grow. (God Participants all) The vengeance is mine concept is life begetting life, not out of anger or fear or desire to best the impossible but to allow growth and its ultimate life in the best capacity.  And what that capacity will be, we simply do not know.

The Great God has always been for me the Michael Talbot’s holographic universe, rolling thunderous boulders down and up bulrushes, because that is what I have lived lumbering in heavy boots, with one foot still in my last world.  The intensity has ruled and moved planets and suns.   Science will give us cold facts with the how for the worlds born.

But not until the connection is seen where the impassioned Spirits of Beings required expansion to manifest creative thought, will the why of it all be understood.  We had it, knew it and sold it for a handful of dry ash.  Why?  Since we are in such a holy place. . . .