You are here: Home › The Evolution Revolution. . .the boot is lifting. . .
By Veronica Hallissey on June 18, 2019 in Essays, Touchstone 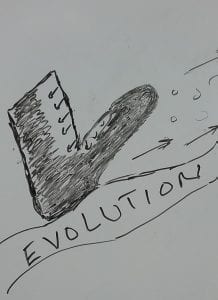 And the children shall lead them he said.  And we will listen to the children.  There will be stories about where they came from and who they saw.

And  I asked the four year old, did you have a good time with Annie?  Her name isn’t Annie he said , it is Olivia.  And where did you meet her and he said in ennuway and where is that I asked.  You know, you know, he said it is where dead people go and wait to be born.

Oh, I said, I forgot.  And gave him a big hug.  And I have been hearing from readers who are grandmothers who tell me similar things.  Because they have been listening with open hearts and the children trust the safe ones.

And the women who are speaking now after generations of being daughters of those who were sung to stand by your man now have voice.  While their mothers were left to protect the children because they knew to educate the children they could not earn enough so they would be silent.  The contradictions were large enough to choke a horse.

We know what we find despicable; the sexual predators of the least able because of race  or gender or simply youth.  The greedy who learned to game the system and wish not only the food off the tables of the poor but to take their work also?

We may be guilt free in this life but perhaps Joseph’s coat of many colors literally means that we wear through lifetimes not only skins of many colors but genders?

The Talmud teaches that the purpose of life is to learn.  And as we learn we must dislodge the log out of our eyes before attempting removal of the splinter from the eye of whomever else.  In the learning we find the taste of salt in the water on our tongues and wonder how come and from where?

Maybe the straight and narrow this time but why the dark holes in memory?   Maybe sensitive enough to feel others’ plights this time because we live long enough to think it through? Or perhaps a nudge to get the wheel of Evolution out of a rut?

When we fail to remember our encounters where we hurt and maimed others, we are a sick people.  Long ago wounded, deeply wounded.  But who is not?

Who picks up the rock to throw it through the window?  Because he is without sin?  Without sickness?

It is a relief to note the lifting of the boot so evolution can breathe freely again.  I see the signs and hear the children.  Please. . . you be the role model to encourage them to make a difference.