You are here: Home › A Sane Oasis In Troubled Times. . . .
By Veronica Hallissey on September 2, 2019 in Essays, Touchstone 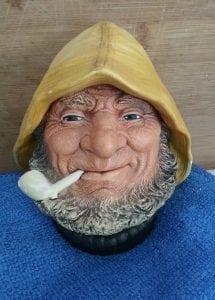 When I was young , there were people in my circle, friends of parents, or neighbors sitting on their porches whom we thought were wise old people.  They were mainly with time on their hands it seemed, obviously going nowhere.  What happened to all of them?

I really don’t know, just remember they were there.  Their hands were always busy.  Old men were whittling wood pieces, turning out to be beautiful birds or art carvings I wished were mine.

Women were sometimes talking but their hands were knitting or crocheting lacy coverings for pillows or antimacassars?  That is an old word coming to mind.

It is a covering for the backs of stuffed chairs to prevent soiling from greasy heads.  (Britannica Dictionary)  Since people nowadays shower each day, we no longer have need of them.

But when they talked, it was always something I did not know but wondered. No one close could enlighten me.  But these old people would and I hung with them.  They were full of things worth knowing.

No one said they were wasting time or too old to do good.  Because they were wise in ways of man and had knowledge about things no one talks of anymore or cares to research.

When talking to a friend today I mentioned these wise ones, saying their minds were always in conference while their hands were busy, as I do in  finishing  this life but unable to conjure up the energy to do what was normal before.  The word worth noting and operative, is unable.

It is a grave mistake we make in not learning a craft or having something to do with one’s hands.  Sometimes even thought cannot be summoned.  Sometimes and this is important, never without hope and never without knowledge that somewhere will be time for what we have refined.

To keep the larger picture in mind is imperative.  Remember,  we are in class. History is full of people who first came with an idea ahead of its time; elsewhere, yes, here, no.

But important it has always been to teach something the hands can do.  In hard times, emotional, economic, or inopportune, when one cannot accomplish what needs be,  the work of the hands create a sane oasis.

So this week, I laid aside the knitting needles, picked up a crochet hook and made some bucket hats.