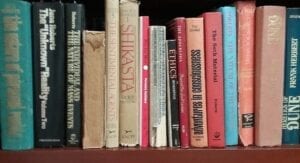 I had been asked what are my favorite books I go back to time and again.  Once there were friends and loves I phoned and chatted before my hearing deteriorated.  And rather than ask to repeat themselves, now my books become my old friends that I find just as refreshing as I did when first read. And without feeling guilt when I turn each phrase to catch their elusive meaning!

I reread and depend on eye sight and insight through lifetimes learned. Books now refresh thought and reveal themselves deeply as I too reveal myself.  There are contemporaries whose works are always timely.

The essays of Emerson and Thoreau speak to us all in varying degrees.  I say to him Waldo, I hardly knew ye. And Thoreau I admonish for the maxims told to those young who left their commitments to follow their dreams, their imaginations.

Accountability and shared work load was not yet in their lexicons. Authors and audience alike.  Yes, I know, I would spoil their fun.  I know.  Other shoulders carried the work while wild oats was sown; other backs were bent.  Forsooth!

Jane Roberts and the Seth books, whose talent was shared with those of her husband to produce controversial voluminous works causing protest lines around the publishing house.  Comfort zones were upset even then with new thought, yes.

While Doris Lessing and the Shikasta Series introduced those like me to evolution and learning throughout universes under the safe heading of science fiction so we did not have to explain why we danced with Spirits.

Susan Howatch with her Church of England  series told of earthy life and meanderings of those wearing birettas and long skirts  before the scandals of the churches both Catholic and Protestant and Frank Herbert with eloquent memory of his wife produced  the Dune books which my sons said Mother, these are your books.  Chapterhouse Dune was written I swear for me and they all are to this day.

These are my peer group I keep close to my chair.  These are old friends with whom I visit.  My newest visitor is Michael Talbot and his Holographic Universe which affirms for me my thinking since I came into this world without a putting place either for my memories or for myself. The others, the ones with worn out covers where I keep doing reference work, are my oldest friends,  my refuge. . . .along with my mentor. . .

In the beginning when I was young
and when I was very cold,
I took my mammoth skin
and drew it closer about me
and found refuge in dreams.

Like a tourniquet,
it stopped the flow of life out of me.

Now I am old 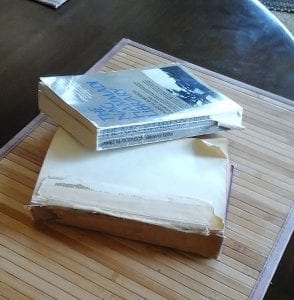 and I huddle still deeper in my woolen wrap.
Closing my eyes, I discover
refuge again in my dreams.

And find it stops the flow of life out of me.  Again.