You are here: Home › Participant

By Veronica Hallissey on September 19, 2021 in Participant, Poetry, Touchstone 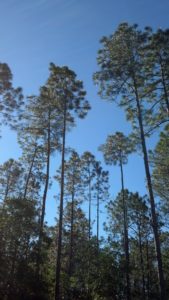 Part of a whole, yet wholly here.
Slowly as I watched
the silence was encompassing.

Piece by blessed piece,
each tree, each entity slowly folded
upon itself and laid itself down.

The screen protecting vanished
as it bent itself into nothing,
a wisp of an idea no longer useful.

Trees, one by one, bent over themselves
and laid themselves down
and disappeared onto the forest floor.

And I thought how neat!
No evidence, no residue of debris
to litter the surroundings.

And time collapsed for me
and events catapulted me again
into the frame of reference I know as mine. . . .

In October of 2016, I went into cardiac dysfunction and was on the way out of this life.  On multilevels  life was playing itself out.  I was on the patio and watched as I let loose my hold on life and watched as the trees lay down themselves, as did everything else in my view.  That we create our reality I read  many times and I was seeing this world of mine dismiss itself neatly.  Not a crumb  left on the table.  My son John had already called the ambulance and we waited.

More than a half century ago I had begun an independent study program on a daily basis.  One’s passionate choice will reveal in time its path and destiny.  Footwork is determined by ones’ cut of cloth.  And how deep the passion will yield some light on the length of study.

I throw cold water on the idea of romance or secrets or magic.  Heavy boots are the order for the hard work of evolution.  It all will become mundane and tiresome with lack of progress for which we all are responsible.

The I am sorries  have to be more than perfunctory to gain sympathy.  We may find remedial classes awaiting and also surprise to find our names attached to gargantuan faults besides  the wayside progeny on whom we have granted no attention as history has shown.

How to convert the human psyche from one expecting entertainment to one pursued by the need to know and learn?  Except to show the results that our passion has fashioned us  into persons we are happy to meet for the very first time.  And want to know better.  We wish also for our sons and daughters introductions to these selves they have not met.  And we hope they come to love.