You are here: Home › I Bring Into Sweet Focus
By Veronica Hallissey on May 17, 2013 in Products 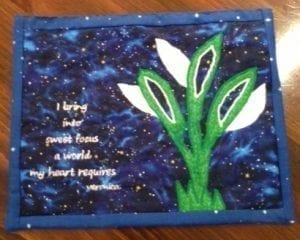 And I heard the young one say,  and I know this true, he said,  that this lady likes to work with blue cloths is because he said,  that she said this is what heaven is like.   And I want to know he said,   how does she know?   And I told him that some people just know things,   not guess or because they believe,   but because they know.   What do you think heaven is like I asked him.   What do you think?   And he said that because he remembered because he was only 5 fingers old,  that he knew and she was right.   What he remembered was that the colors of everything was so bright,  even brighter he said than the sun or even,  he said,  the moon in the night sky when everything else is black.   Then you know,   I said to him,  you know.   And he said then that there were lots of things he knowed,  but he did not like to say because other kids said it was baby stuff.   But he knowed,  he said,  he knowed and this lady also knowed he said.  Do you like the colors she uses, I asked.   And he said that this is what he remembered and they are true.

Legacy
Where Can We Go?

6 Responses to I Bring Into Sweet Focus