You are here: Home › Reaching Conclusions
By Veronica Hallissey on October 29, 2015 in Uncategorized 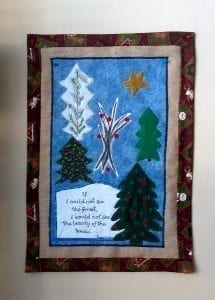 (I wrote this journal entry 9 months after I had gone into cardiac arrest twice.  It was written February 02, 1994.  There has been no editing.  )

I think I have come to some conclusions.  Many of them are so simple and primary that I wonder why it is that they have not been conscious ones.  No doubt so that I keep on trying to make sense out of nonsense.

All of life is mental.  It is all lived in the head.  The only difference between Me and Thee is that I know it.  The only difference between me and an Other is that I know it.  I know that when I leave, I will take my world with me.  This is the world that has been built on substance as I have seen it, felt it and created it.  I will take it and move on to a world of similar qualities and if there is none, I will have made one.  I will have made this world chiseled out of the heart of me and the greater heart.

It will be to a world of words that I go.  A world where the weight of words is not only understood but felt.  Where emotion enriches a life, making it felt at levels so deep that words of physical life would not explain it.  Worlds where the intuitive power of understanding is not a sometime thing but a thing of substance that is understood and respected.  It would be a world where the worth of life is not in what one can smell and taste and feel with the hands but with the heart.  That it can be all of these things and loved because the intuitive value cannot be translated but can be understood.

It would be a world where the intrinsic worth of the individual is not measured according to what others are doing or thinking but measured by the depth of thinking.  It won’t be a world for all people but for those who would know what it is that is written, not by the mind so much as the heart.

It would be a world where the child is held sacred because there would be knowledge of what Being is all about.  That from where one comes because of those things that moth and rust cannot destroy are the measure of who we are.  Not by the things that this physical world sets store by but those things spoken of since ancient times, those things whose value cannot be measured.

It is a lifetime work.  It is a lifetime of contemplative living, putting into practice what the silence instructs us to do.  By living a life according to the highest precepts held, even in the face of rejection.  It is the strength to say this is for me, knowing that others would find one either objectionable or censuring.  It is in the power to say, this is what I am, knowing that isolation will be the result.  It is with the knowledge that at some point one says, this, too, I can handle, not without discomfort but with a modicum of strength.  And knowing all the while, that we teach even as we are being taught.

All of the above is not a matter of faith, though there is a surrendering to a Will not one’s own.  It is not a matter of belief, because belief would take us to those paths that show both of these that become knowledge.  And when faith and belief become knowledge, one then becomes free to say, ‘I know that I know’ and there is no argument.  One then enters the peace that passes all understanding and there is rest.  Even while one still breathes the elixir of rarified Earth air.

This is where I find myself this day.  Approaching my 63rd birthday and knowing the journey has been worth the while.  The one regret I hold is that I have not been able to translate these precepts to those I love the most.  The word,  Word with a capital W, language, is all we have to translate the knowledge and motion of our hearts.  And it is inadequate to invest it with sufficient meaning, nuances that would begin to suggest what meaning we would have words carry.  Our gardens are all we have to leave to those who would wish to know the footwork, the heartwork.  And the gardens are not just what we plant to embellish the physical yards but what we leave to blossom in our wake.  We have been called Earth Gods.  Some of us know it.  And that is the difference.

(in going through my files looking for something else,  I came across this entry.  It has been some 21 years since this was written and no one more surprised than I am to find me still breathing this Earth air.  Much living has been done and much has been integrated.  My regret still stands but what I have learned from it is that everyone becomes their own project.  And it is up to the each to do their own research.  It begins within.)

Morning Prayer
We Are Becoming. . . .