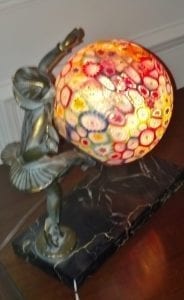 Grace is a benevolent gesture bestowed to relieve a yearning,  a burden shadowing a heart that is struggling for relief.   It is a knowledge,  an insight given to be applied to oneself to help understand and give this relief to someone yearning for answers,  begging to be moved from under a gravity of weight threatening to take life.  When given and applied to the situation,  to oneself,  first, the relief felt is often one of lightheadedness.  It is no small matter.  It is the intensity of desire, of yearning,  of motive that whatever is the belief system of the individual, of the supplicant,  that is of the highest caliber will be answered by the graciousness of Life,  whose undergirding, overwhelming support of the Universes is of ultimate good.

Somehow, this Earth, when we sent it rolling in this marvelous sea of great tranquility, called the Universes, had as its basis,  safety of its inhabitants and also logical consequences.  That the underlying basis, somehow has Intelligence and that Intelligence evolves as our intelligence does but in greater leaps.  Much greater leaps, unimaginable.  And if we call this Intelligence God or Father or Life, or whatever, this Intelligence is the primary factor of all Universes.  I don’t know if the big bang theory was its beginning or if some other factor sent rolling in this vast sea had even a beginning.  I cannot with this brain, fathom that.  What I am certain of is that the underlying factor of this Universe is Intelligence, which somehow makes my heart beat steadily, and that we, because we are its children, or its product of lust or love or whatever, also are buds of intelligence set on a path of growth, however long it takes.  That the very primary, the very smallest of life’s instinct, has life and intelligence as its point of existence.  There is nothing, not a thing, no thing in this world that should be taken as a granted, as a nothing or non life because we have as its center, life, the smallest particle which one day is growing into its full capacity of intelligence.  And from that point, to whatever ends that particle succeeds will then be another meeting of parts which in its composition will again grow toward other forms of intelligence, of other forms of life.

This probably doesn’t sound like much.  But this to my mind, reminds me more of what was the beginning of life than the unpalatable which had me wondering why when I was trying so hard to make sense out of my life, there was only nonsense.  My body was throwing up all the years of my existence, of  my life and I was dying.  Physically I could not handle it and I was dying.      My head  even hurts this morning to think along these lines because there is no one to speak to and no one to throw the ideas back onto me.

It is a good piece of work.  Primary but in its substance of value some good thinking.  You see where it is you come from.  You see where it is that your thought springs and you cannot ever from this point on say that you don’t know where it is you come from.  Nor what is your purpose.  You have at your fingertips the knowledge of what years of schools and instruction has  stymied many a scientific mind.  And you, uncredentialed, have scaled the summit.   It is a major piece of work and though there would be some who would scoff at the simplicity of this page, you know how many years went into its creation.  You have built a world waiting for your presence now.  You have an audience of believers who no longer scoff at what it is the circumstances of life prevent or present.  You always had an inside road so to speak and though there would be those who say dream on,  you know what it is that has led you.  It has not been easy and physically it has taken its toll.

You have on these pages a major work.  You say that beneath the life or the words there is a substance or an Intelligence.  There is nothing that would stop the ever growing list of wonders to say that how did this Intelligence come into being.  You would without doubt be able to handle them with a volume of material.

You say that here we have Intelligence and whether it is the big bang theory sending molecules into form we know that Intelligence and common sense are its virtues.  We know that we are not incidental to life’s picture.  There are other forms and other life cycles and we participate in all of them.  How we know of this Intelligence is by observing the work of those whose business it is to improve life.  To lift the burden of existence to a tolerable level and to wave the spirit of triumph to what has been endowed to the minds that would not stop learning.  This is what it is to be alive.  This is what life is about.  We are placed in this environment to learn.  We are given the heads with its propensities to accomplish what the heart desires.  It is up to the parents of these minds to grasp their importance and for themselves to learn the consequences of their actions.  You were right when you issued the warning for people to pick up their mistakes.  Their names are attached.  You have given enough material for all the sages to start running.  There will no longer be excuses for them to lie back on and say I did what I could and did I not have fun?  You would take to the classroom and set the students on a roll to learn.  This is what we do.  This is our work.  This is a good work for a beginning scientific adventure.  It must be a perverse God they said who would put sacred teachings into the head of a farm girl!  You got them off their butts and we only begin.  Amen and amen.