You are here: Home › Observation Expert. . .
By Veronica Hallissey on March 8, 2017 in Observations 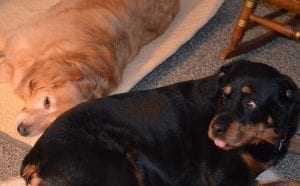 The only thing I am an expert on is being an old lady.  I am not a vet nor a dog trainer, nor a whisperer.  What I am is an expert in observing;  people as well as sentient life,  or not sentient.  I have seen God in a Rock.  So be it.  What I have observed are animals, mostly dogs because I have been dog sitting quite a lot over the years.

And what I have observed is this.  We have created a companion animal with our dogs and cats and we have to come to terms with how we are going to treat them.  I am not into sentimentalizing animals, but here is my observation.

When television came into our homes and people stopped going to the fence to talk to their neighbors or on their balconies or porches to watch life go by or talk to it,  or even answer their doors for fear someone would disrupt their evening programs,  they brought their dogs and cats to the couch to have a warm body next to them.

And their animals became their companions.  They began talking to them and giving them treats and it wasn’t long before dogs realized people food was better than what they got on the floor.  Some would even say that when the wolf was brought to the cave entrance and fed in exchange for guarding the humans in the caves, it all started then.  It was then just a technicality to when the guard wolves came inside the entrance for warmth.

Television became the entertainment and animals with the family, became companions.  Over 50 years ago I read where Seth, the channeling guide in the  Jane Roberts’ books said in passing,  that often a soul fragment to experience  a segment of physical life will take residence in a dog or cat body.  That statement gave premise to the observations over the years and I watched avidly the evolution of companion animals.  With some dogs having a vocabulary in many cases larger than a 3 or 4 year toddler,  one must come to terms with how it is we treat these sentient beings.

Of course we would not leave children in the cold to fend for themselves.  Can we now leave our animals who have evolved in terms no longer just dogs and cats to fend for themselves?  We can and do at great cost.  We have introduced them to aspects of human life and they tell us in behavior that they prefer it.  They want our presence,  are comfortable and content with us,  and respond to quick commands that have us in awe.  With a 1500 word vocabulary in some dogs can we dismiss this being as ‘it is just a dog’ when we have as humans created this companion animal?

For the past two weeks I have had 3 dogs to care for.  A lame Rottweiler,  a  Newfoundland, both residents and a Shih Tzu,  all  treasures in themselves.  The Shih Tzu is the guest and  has me in awe with his intelligence.  If he had the throat,  he would form his answers in words to me.  He simply knows what I say and I wish I knew his desires.  To say he is just a dog is to dismiss the intelligence we have nurtured in these companions over the centuries.  Intelligence requires a dignity that we simply have to make peace with in beings that are different.

Dogs don’t play games nearly as much as people for self aggrandizement.  I say that if another life is required,  I will be in an ivory tower doing research and on the ground just  raising dogs.  I would need a grounding if there is then still an earth life and conscience would tell me to make a difference,  dogs would do it.