You are here: Home › Another Meaning to Life Everlasting?
By Veronica Hallissey on September 2, 2017 in Essays, Lesson 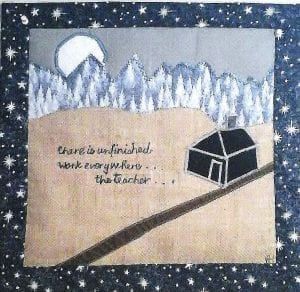 My friend and I were sitting in the hall waiting for the class doors to open.  I looked at the hanging painting and had to look away.  It made me sick to my stomach.  I knew the painting but not the artist.  It was of a one floor building, stark in a barren landscape.  The barrenness set my teeth on edge.  My friend asked me if I was suddenly ill.  I told her I knew that place in the bleak landscape and it was desolate.

The following was scribed about the painting in a journal entry. . . . The barracks were not in the painting.  There was an isolated house you had already seen.  You have been there and have given it your best work.  It demands workers to progress. The shillings ( money was shillings; why I don’t know) did not pay for the enormous amount of labor involved.  It is occupied territory for the barracks were significant.  We were told there was a type of evolution concerning mind taking place and a large physical work involved with the refinement of spirit .

You thought it was a nowhere but it is a world of some time and a where.  People need to give thought to what life everlasting means.  If heaven means playing the harp on a cloud,  have they given thought to harp lessons? Even with the promise of wine,  the vineyards are in need of workers.  Fields are unplowed.  Work needs to be done.  Lives lived make a certain shaped something of us.  And boredom leads to trouble.  A case in point,  out of boredom Earth was created and it hasn’t been a walk in the park,  now has it?

I have stood open mouthed and gaped when illusions have been shattered.  I labeled them bellywhoppers when they first doubled me over.  Coming into life with an open head did little to keep me innocent  but it did make me say many times,  I can’t believe!!!  whatever happened or was said.  Heaven stood by and gaped as I glued the pieces together.  An open head helped to understand the reasons why of behavior,  but heaven never said it would be easy to live with.

If you are not an immigrant now,  in our next worlds we will be.  For certain. Keep that in mind in the daily issues here.

2 Responses to Another Meaning to Life Everlasting?