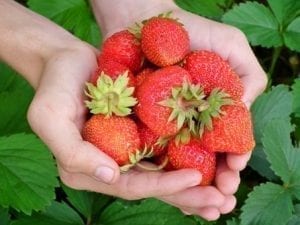 A Lesson In Strawberries. . .

( I awakened one recent morning in conference with someone who said it was again time for the article on the lesson in strawberries.  Several years ago it was printed in The Detroit Free Press and has since been reprinted several times.  A man appeared at my door the first time with a quart of strawberries from his garden and several stories to tell about his mother and her philosophy.  It is with wonder that some ideas will strike a warm bed of memory and spill its essence.  I cannot bring to mind to whom I was talking when awakened but no doubt a classroom again.  I think I am nighttime’s perennial student.)

I was a young girl, about 12.   It was our first summer on The Farm and it was a hard one.   But it also was filled with good food straight from the warm earth.  My mother had a talent for growing things in the city despite its polluted air; even 70 years ago people knew to be unhealthy.   But in the clear air of the country, in the soil of her loam filled garden, her talents blossomed as did her crops.

We were getting produce ready for the stand down near the road.   As we were preparing the fruits and vegetables, selling them as fast as we put them out, friends from the city were arriving.  They were diverse characters.  Some were people in her circumstances with many children and little money.  A few were wealthy but the outstanding characteristic of all these relationships was mutual respect.

Toward the late afternoon, I was tired and whiny.   The source of my irritation was the fact that my mother was giving to her friends, without charge, the best and finest of what we were putting out.   A bushel of potatoes here, quarts of strawberries there, a basket of fresh vegetables here.

But the strawberries were my argument.  I loved them and the ones she grew were the reddest, juiciest and largest I had ever seen.   They were sweet clear through and the dream stuff of that first June on The Farm.  With the heavy cream separated from the rich milk the excellent cows gave, these were mine she was giving away.  The strawberries summed up my resentment.

“You can’t keep giving away our profits,” I said.  “you have given away half of all the produce!”

She turned to me in a voice I have not forgotten and a lesson that has stayed with me.

“These are mine,” she said.  “I will do with them what I please.  These are for me to give away if I want to.  No one can tell me who to give to.  My friends may never do anything for me, but if one of them does something for my children or my grandchildren, then that will be payment for me.”

When time, whole weekends of time, have been given to sit with a sick child, to listen to an impoverished spirit, to make dinner when the task seems insurmountable and appetite non-existent, to do any of these when time has become our most precious commodity, it is a gift of Spirit.  When a check arrived unexpectedly from someone whose only reason was “I remember how I would have felt to have received this” or the someones who oftentimes helped our children through school because “it was done for me.”

I thought of the lesson in strawberries.

As I review a life where so much has been done for me and mine, from sources unexpected, I am grateful for the lesson in strawberries.   My mother gave what was hers to give, what she worked for and gave freely.  She was paying it forward long before the idea became novel.  I do not forget.

The Past Is Still Happening. . .
Conversations: World Creation. . .