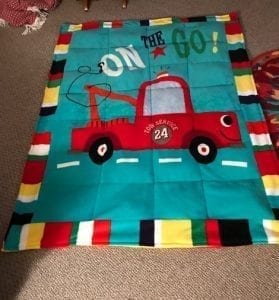 I had a dear brother in law who said he liked asking me questions because he knew I researched everything I opinioned.  Unless I had either experience or knowledge,  I refrained expression.  I considered his a high compliment.

So when I learned of gravity or weighted blankets,  I began the long sit in at the computer.  And I read  and reviewed the reviews from ancient corners of the universe.  And decided to make a small throw to cover restless legs.

I thought plastic beads too pricey and searched out possibilities and then finally settled on rice for a try out.  I took 34 inch by 43 inch muslin and decided on 5 inch pockets.  I will spare the details because if you know of the blankets, you already know how to make them.  I also made a cover like a large pillow case for it and ties at the end.  In case I spilled something or the dog drooled effusively.

I used almost 3 pounds of rice.  I laid it crosswise on my bed and slept the sleep of the righteous.  It worked fine and still does and I love it.  3 pounds of rice is right for me for this size.  For restless legs it truly works also.

It is a like a cosmic hug.   Enough of a weight to anchor me lest I float away.

When I first learned of the blankets I was surprised at the number of teachers and parents, mothers mostly reported, of children with autism.  The teachers lamented because there were not enough blankets and children were timed for use of them.  Parents were enthused but funds were limited and plastic beads high in cost.

With children the beads were necessary because of laundering.  Rice does not allow laundering which was why I made a cover.  Chances for adults to drag the blanket around are slim but an occasional spill is possible.

The photo is one my niece made for a grandson.  I think the result is super.  It is not the answer for every problem but oftentimes it helps soothe the light sleeper.

Perhaps it would have helped the child I was to become more likable and less irritating if I had been  able to sleep beneath a cosmic hug.  It is only a perhaps, but we must remember that many children cope with memories still fresh of the world they came from.

Sometimes a reminder to get their blanket for a cuddle is all they need.  They walk a high wire and when a parent is unavailable  they need a hug more than a lecture.