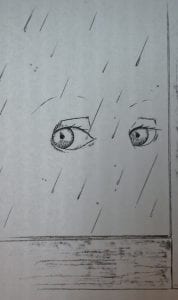 When I hear the words hitting my soft spot with a why should I worry?  You do such a good job of it! I want to be mean and snarky and say we would still be crawling on our bellies if we did not have those who gave thought that this mode of travel  would be hazardous to the health of upright humans.

But I am certain that upright humans probably were not in a future of non thinkers.  Not everyone has the ability to trudge a perilous territory seeking out reasons for problems.  It takes immense knowledge to see connections when events appear to have no connection.

Immense for the time when common thought sees no problem at all.  And that is the kicker.  Common thought.  For those who are new to my work, I update this previous essay.

My mother, the Jenny, was an orphan adopted at 8, by owners of a barroom. To not go back to the orphanage, she learned to work hard to survive, emptying spittoons and scrubbing wood floors. She became a worrier also because she was late every day running to parochial school and being punished by the nuns.   She escaped by marrying too young and giving birth to 8 children.

All she knew to survive was to anticipate problems.  All 8 of us became professional worriers.  Four of us still survive, the eldest within 2 years of a hundred and the younger babe at 87.  We 4 are still expert at worrying.

When the doctor stood at the door of the ward and mourned the death of the newborns and their mothers,  he observed the young doctors moving from one bed to another.  He noted also they only wiped detritus from their hands with a dirty rag.  Could they be carrying something from one to the other?  So he instituted the washing of hands between patients.  And the babies stopped dying and so did their mothers.

He connected the dots.  He worried long and hard enough and came to conclusions.  Worry is an advanced form of thinking.  It is impossible for some people because they simply do not know enough to see cause and effect.

Most do not know how to encircle the problem.  To have a human being who understands the fuller picture,  we have to introduce more levels of experience.

When this planet, our Earth, is called a classroom, it is because of advanced classes of education.  One crisis after another is chosen to further our advancement of chosen work.  When we complete a class, we move on.  It is with ultimate concern we who see the devastation of this natural classroom worry that future generations will not have it.

It is with a sacred blush that we who have loved it to distraction ask that its inhabitants become worriers.  Study the behaviors that have led to these elements of crises before our beloved best school be destroyed.  Not everyone knows enough to worry.  Let us be the smart ones.

Perhaps we who worry can do something because we know only an advanced form of thinking now will save us.