You are here: Home › The High Jumper. . .
By Veronica Hallissey on October 4, 2019 in Observations, Poetry, Touchstone 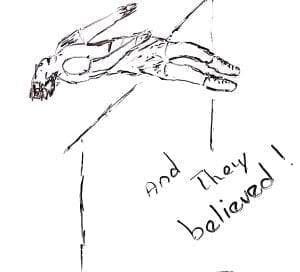 It has been said with anger
that I set the bar
too high
for mere mortals to scale.

It was not for them
the bar was set
but for me,
to rise as high

as the immanent god
had deemed for me.
I could not know
that they would try

to jump for me.
I was not the reason.
It was for them, you see,
for someone told them

they would never do it .
I showed them though
they could .
And they believed.

And they surprised themselves.

(Please understand that even when I learned that I was not abandoned, I was not spared.  This was not a known premise for me until I was quite aged.  Heaven does not play favorites.  The log was always in my eye;  hard going.)