You are here: Home › Given By Grace. . . .
By Veronica Hallissey on November 17, 2019 in Essays, Observations, Touchstone 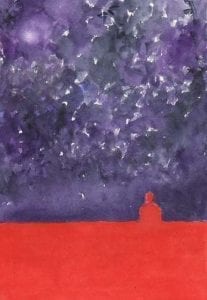 My mother and my sister would be saying now, there you go alibi-ing again.  Why don’t you just say that you make excuses or that someone is too lazy to try, whatever they are not doing?

Because I don’t want to think they are so shortsighted or so full of themselves they think there is nothing to learn.

Yet I have watched people who cannot put themselves at the feet of someone expert to learn something.  They simply cannot.  What that does to them I do not know.

Whether their self esteem is shaky or they are arrogant in thinking there is nothing to learn, is beyond me.  I am willing to strip the knowledge of everyone; even a newborn I ask from where did you come?  I want to know what they think or wonder but when they say they know something,  I want it also.

I was brought aghast when I was so excited to learn that a beloved did something I literally begged,  show me how to do that!  She looked at me with disdain and said but then you would know as much as I do. . .

And I recoiled with hurt.  My budding intelligence and fierce desire to learn was stepped on.  I was pushed outside the circle.  There was no embrace to lean against.

I have been aware when an idea or conclusion I reached has been used without assigning origin.  Once it bothered me greatly but even realizing that there is nothing new under the sun, I chafed.  Especially when my conclusions were met with derision but now being voiced and hailed as thinking outside the box.

A dear friend reiterated time and again that a lot of work could be done in this world if one does not mind who gets the credit.  True?  Very.  I still make excuses or alibis because I cannot make judgments on what I cannot know.  A red light or green light at the corner of Main street is easy to judge.  But to judge a perilous shaky self esteem could be tragic.

A lot is Given by Grace to each of us.  The source we cannot know for certain.  Yet we know when it is a Given.  It is by Grace, a benevolence bestowed I acknowledge often.  And my good friend is remembered often when I think. . .

yes,  a lot of good can be done in this world if we don’t mind who gets the credit.   Thank you Jan, for that gem.