You are here: Home › Among the earth’s persons. . racing toward his truth. . .
By Veronica Hallissey on February 21, 2020 in Lesson, Poetry, Touchstone 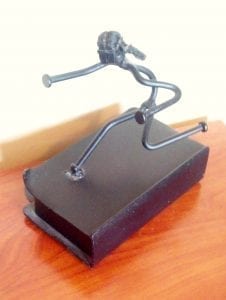 We were sitting at dinner on the Farm visiting with my beloved burly brothers.  I had been the first sister amid 5 brothers born and never doubted their love.  They were my introduction to the world of men and they could do everything. And when I first talked with words of meaning, I announced my intent to marry them all and be their slave!  I think I was about five years old when I stated my premise.

At that dinner, my brothers were talking about what they did to help, the meaningful work of life.  And when they got to the fledgling newly wed they asked what do you do?  In a loud voice he proclaimed. . .I pay the bills!  And a thoughtful response from my quiet brother. . . that is the easy work.  The hard work is within four walls.

And my life of nearing the century mark in a decade taught?  That the hardest job in the family is on the premises as parents.  That it was with cosmic intention birthing would be the extension of the mother’s heartbeat and the father’s process would be the soothing open hand on the child’s brow in love.  This was the paving way to brotherhood among the earth’s persons.

Both would be required and life would be lived with promise and the living made with talents sorted.  Where the talents the world used would be the living made and home where children reared with love.

In this new country settled by immigrants, life would try on and keep trying on the many ways to make a living and a life.  We still are in process for a more better fit.  With working it out, transitional methods are tried and in flux.  But we continue with hope to work hard.

The caring, the uniting, the intention of belonging to the greater humanity was what being human was all about.  Before going on to other worlds, we must learn to accept and respect the differences in ours.

Life everlasting  means that chances are given in many worlds for Beings to work on themselves, to bring forward the good within each.  We were told of fields ready for ploughing and farmers needed to feed mind and body.

Jesus said my father’s house has many rooms and this is but one of them.

It is said that the heavens
care not what goes on the world stage.

It is too late to change
the outlines of a world gone mad.
But here. . .

Within four walls are children
eager to eat the bread
of the parent gods
to feed hungry minds.

Those the heavens note,
for  within these walls
is the outline for peace
on the next stage.

And here, the nurturer, the feeder,
will be given what is necessary
to begin the new world,
the brotherhood of man,

that could not be dreamed
with the old man’s dreams.