You are here: Home › Sending The Future A New Direction. . . .
By Veronica Hallissey on June 5, 2020 in Observations, Touchstone 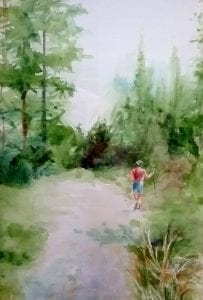 I had been at sixes and sevens (so to speak) this week.  I should explain that the idiom means things being in great doubt with me.

The idiom is centuries old coming from (more nearly surmised) the English.  Since I married into an Anglo Saxon Protestant family,  I was introduced to what were strange customs for me.  And this idiom was one of puzzling language.

Since being just twenty, eager to please, I learned quickly, both joyfully and askance sometimes.

Leading me to conclude at almost a decade less than a century, that for peace to ensue among men of diversity, those things which unify us as a species should be taught in all beginning grammar schools along with the differences in cultures.

It seems the differences in worlds (and words) and we are just one of many, are prime fodder for simmering anguish.

How we are united in so many ways fade in many minds while the differences sadly become up front.  And the differences wielded so well are the fears quietly smoldering unknown even to the holder but when given voice turn to rage.

Tyrants live in various houses and use their tools so wisely they leave Heaven aghast as to the hurt that is done.  Tyrants need not use hostility.  They need not use weapons which destroy anything but self esteem.

And many are they who use their own neglected self esteem to drain the other of pity and sympathy and strength.  And because the tyrants feel not appreciated, they say in so many words,  I am number one and let no one in this house forget it.  And tyrants proceed to devastate laws and their abiding citizens along with their countries and constitutions of families, be they charters or people.

And because so many think their futures depend on the largess of the tyrants, in fear they remain silent.  Until the time the disparaged ego rises and takes a stand.   It is written. . . .

Your acts upon your days have already sent the future into a direction which will reveal itself.  They will know who we are by  the unfolding days.  We will now stand proud.

2 Responses to Sending The Future A New Direction. . . .