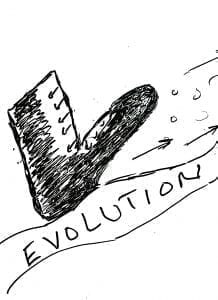 Having been an avid newspaper addict, and leaning to clutter, I tackled a box of clippings yellow with age because then there was no money to buy books.  The local libraries knew the boys and this mother well.

So I read for the past week brittle clips mostly from early 80’s.  I placed aside an article from Parade Magazine November 10, 1984 written by Arianna Stassinopoulos about Jonas Salk, celebrated for the polio vaccine.

Haunting me she writes of his premise of conscious evolution.   Paraphrasing and editing .  ‘her and him . . .he sees a major shift in human evolution from struggling to survive to live,  to choosing to evolve.  In fact to survive, we must evolve and it requires a new thinking, behavior, ethic and new morality.

Mankind then survives, and not only the fittest’.

Going on this magnificent treatise says to physically survive we act in fear.  The fear need not be actual, but we behave as if we lose place, things, relationships, position. To switch behavior to conscious evolution is not easy.

I have never heard anyone speak of conscious evolution but it must have rooted deeply for me.  I have observed often gaps in behaviors.

Seeing the inequities of life and those in power profiting and our surfacing sense of unease being party to the reasons, we simply cannot survive in this emotional sewer.  Our shame is not what we can live without suicide.

In being honest with ourselves, we have listened too often to those who told us not to rock the boat.  And watched beloveds drown.

The fatigue in monitoring one’s conscious behavior is total.  One has to learn everything anew.  Courage to stand one more time when one falls is success.

Like Yoda we don’t only try but do, to overcome fear, anxiety, hatred, revenge, rejection, dismissal, and gender differences, but each time is a major step in potential of all beings everywhere.

Our change of address when we leave Earth will make our admittance easier to where we have earned the right to go.  I kid you not.  If we have to repeat or take remedial instruction, word is no longer pleasant.

Dr. Salk adds this injunction and sufficient it is for the wise. . .’Conscious Evolution  is like an infection with more and more people becoming carriers, whether among human beings or fruit flies, and it might as well that evolutionary changes spreads quickly through an inbuilt mechanism, as if someone called a town meeting or the 7 o’clock news.’

Take heed.  Over 35 years ago the language was and is still common for today’s pandemic, Covid -19  that has killed over 170,000 of us.  Dr. Salk talked of saving mankind by becoming better human beings.  Being good is work but highly addictive.  One ends  up having fun and it is contagious as Dr. Salk says.  We all then enhance life in all forms and that chance we all wish for.