You are here: Home › We Had But One Name. . . .(in Genesis)
By Veronica Hallissey on October 9, 2021 in Essays, Observations, Touchstone 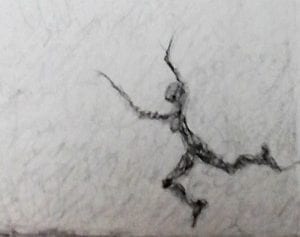 Perhaps Doris Lessing and I would not be close friends because of commitment.  But I can and do admire her brilliance with the written word and some of her ideas.  Two  things of value stand out.  The first is of  long standing and I spent hours locating this source only to find it at midnight in a steno book I happened to pick up before closing shop.

From her book Sirius. . . Laws are not made.  They are inherent in the nature of the galaxy. .of the universe.. . . After a lifetime of independent study, another of my conclusions is  that laws are inherent in the nature  of all life.  It is folded into a conclusion I had reached early on that man is basically good because man is basically god, (divine).  If this were not so we long ago would have gone down the tube and stayed dead never to rise.

There is the thought that good can be derailed for a time, but to dismiss and be murdered forever cannot happen; because of the inherent good, basic good in life itself.  As the saying goes, god don’t make no junk.  Because of our narrow focus, our conclusions are not fully realized .  When the larger picture is ours, different conclusions will also be ours.

Standing where we are, whether the terms are God or Life, Yahweh, or Father or Science it all yields truth as far as we can acknowledge, especially if our actions show that our lives bear witness to what we espouse.  And  our actions enhance humanity, there is little argument.

The next quote I found in researching Lessing.  “Very few people really care about freedom, about liberty, about the truth, very few. Very few people have guts, the kind of guts on which a real democracy has to depend. Without people with that sort of guts a free society dies or cannot be born.”

This is a loaded statement because most  people live lives nested in fear.  And the fear takes many  forms in job loss, prestige, threats, money, and whatever turns us immobile when our buttons are pushed.

It takes a courage unbelievable to have the knowledge of how to correct a problem and yet to work around the known frailties of humans involved to prevent an eternity of more anguish to shovel.  One’s own integrated knowledge can be managed and democracy chooses her heroines and heroes.  Welcome Frances Haugen!

We see a congress of able bodies leveled and paying homage to a whiny loud voice.  For shame., for shame. . .